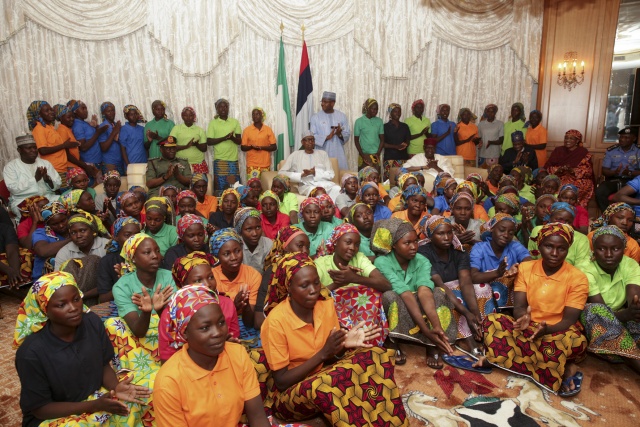 An handout picture released by the PGDBA&HND Mass Communication/Sunday Aghaeze shows Nigeria's President Muhammadu Buhari (C) sitting among the 82 rescued Chibok girls during a reception ceremony at the Presidential Villa in Abuja, on May 7, 2017. Eighty-two of the more than 200 schoolgirls kidnapped by Boko Haram in northeast Nigeria in 2014 arrived in Abuja on May 7, 2017 to meet President Muhammadu Buhari after a prisoner swap deal secured their release. Presidency spokesman Femi Adesina said the schoolgirls from Chibok, in Borno state, were met at the capital's airport by Buhari's chief of staff Abba Kyari and taken to a medical facility for checks. (SUNDAY AGHAEZE / PGDBA&HND Mass Communication / AFP)

(AFP) - Nigeria's President Muhammadu Buhari on Sunday vowed to help to 82 schoolgirls who have been freed from more than three years of Boko Haram captivity after a prisoner swap.

The girls -- who were among more than 200 kidnapped in 2014 from the Government Girls Secondary School in Chibok, northeast Nigeria -- travelled to the capital Abuja a day after their release to meet Buhari.

"I cannot express in a few words how happy I am to welcome our dear girls back to freedom," Buhari said in a statement, pledging that the presidency would "personally supervise" authorities charged with ensuring the girls' "health, education, security and general well-being".

Presidential aide Bashir Ahmad tweeted a photograph of the girls, most of whom were sitting on the floor of Buhari's official residence, as the president sat in an armchair dressed in white traditional robes.

The meeting came shortly before Buhari was whisked out of the country on Sunday evening after weeks of concern over his health, heading to London for "follow-up medical consultation", according to his spokesman Femi Adesina.

The teenagers, who had been taken to a medical facility for checks after arriving in Abuja by military helicopter, met with the president for about 45 minutes, said an AFP reporter at the scene.

Adesina said they had now been "handed over to those who will supervise their rehabilitation".

He did not comment on how many imprisoned members of Boko Haram -- whose fight to create a hardline Islamic state in northeast Nigeria has left at least 20,000 dead since 2009 -- had been released in the swap.

But AFP understands at least three suspected senior commanders, all of them Chadian nationals, were handed over.

Information Minister Lai Mohammed said he could not confirm claims that as many five militants were released.

The girls arrived from the northeastern town of Banki, on the border with Cameroon, and were met at the airport by Buhari's chief of staff Abba Kyari.

"Welcome our girls, welcome our sisters, we are glad to have you back," Kyari told them, describing it as "a very joyous moment".

A military source said one of the girls was "carrying a baby with her, a boy of less than two years".

The International Committee of the Red Cross (ICRC) said it "facilitated the safe return" of the girls as a "neutral intermediary" and tweeted photographs of girls boarding a military helicopter.

Many of the students wore colourful akara print dresses, visibly tired from their ordeal.

The presidency had announced late Saturday that months of talks with the jihadists had "yielded results" some six months after 21 other Chibok girls were freed with the help of the ICRC and the Swiss government.

Boko Haram fighters stormed the girls' school on the evening of April 14, 2014, and kidnapped 276 teenaged girls who were preparing to sit high school exams.

Fifty-seven managed to escape in the hours that followed but the remaining 219 were held by the group.

Boko Haram's leader Abubakar Shekau claimed in a video message that they had converted to Islam.

The audacious kidnapping brought the insurgency to world attention, triggering global outrage that galvanised support from the former US first lady Michelle Obama and Hollywood stars.

The girls have become a symbol of Nigeria's brutal conflict. Last month, parents and supporters marked the three-year anniversary of the abduction, describing the situation as an unending "nightmare".

Enoch Mark, a Christian pastor whose two daughters were among those kidnapped, said of the latest releases: "This is good news to us. We have been waiting for this day.

"We hope the remaining girls will soon be released."

Accounting for three other girls who have since been found, a total of 113 Chibok girls are now missing, although Shekau claimed last August that some had been killed in military air strikes.

Boko Haram has used kidnapping as a weapon of war, seizing thousands of women and children, and forcibly recruiting young men and boys into their ranks.

In a less publicised attack in November 2014, some 300 children were among about 500 people kidnapped from the town of Damasak, on the border with Niger, in the far north of Borno state.

Most are still missing.