Climate envoys meet in Bonn, but all eyes on Washington 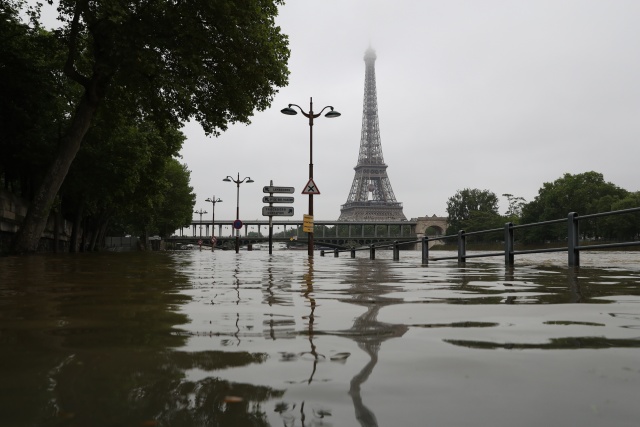 (FILES) This file photo taken on June 2, 2016 shows the river Seine bursting its banks next to the Eiffel Tower in Paris. As UN negotiators meet in Bonn to thrash out rules for implementing the climate-rescue Paris Agreement, the stakes have never been higher. The number of climate-related extreme events -- droughts, forest fires, floods, major storm surges -- have doubled since 1990, some researchers say. (KENZO TRIBOUILLARD / AFP)

(AFP) - Uncertainty over America's future in the climate-rescue Paris Agreement loomed large over UN talks in Bonn Monday to work out the nuts and bolts of implementing the hard-fought international deal.

US President Donald Trump has yet to announce whether he intends keeping a campaign promise to withdraw Washington from the pact in whose birth his predecessor, Barack Obama, was instrumental.

Media reports have said the White House could hold a special meeting within days to discuss the future of the agreement clinched in 2015 after years of tough bartering.

But David Balton, the US deputy assistant secretary for international environmental affairs, said Monday: "The last thing I heard is that the president, our president, has indicated that he plans to make a decision some time over the next couple of weeks, but not this week."

A total of 196 countries are now parties to the climate deal which Trump threatened to "cancel".

The May 8-18 Bonn meeting is meant to start drafting a "rulebook" to guide member countries in executing the pact, which seeks to brake global warming by curbing fossil fuel emissions.

But the negotiations risk being hamstrung over fears that the world's number two carbon polluter will pull out and throw the pact into disarray.

"There's no question that if the US withdraws it is going to create difficulties... in the negotiations," Paula Caballero of the World Resources Institute think-tank said as climate envoys met for their first session since Trump took office.

The US did send a delegation to the talks, led by Obama-era negotiator Trigg Talley, who declined to comment on their brief.

A State Department official told AFP: "We are focused on ensuring that decisions are not taken at these meetings that would prejudice our future policy, undermine the competitiveness of US businesses, or hamper our broader objective of advancing US economic growth and prosperity."

Numerous speakers at a plenary session Monday stressed that the deal cannot be "renegotiated" -- a proposal of Trump's Energy Secretary Rick Perry.

European climate commissioner Miguel Canete, was "in contact with the White House to persuade them to stay," Yvon Slingenberg, a representative for the EU bloc, said in Bonn.

Widely hailed as the last chance to stave off worst-case-scenario global warming, the Paris Agreement was savaged by a campaigning Trump, who called climate change a "hoax" perpetrated by China.

With the rest of the world waiting ever since, Trump has said he will make his decision before the next G7 meeting on May 26-27 in Sicily.

Salaheddine Mezoua of Morocco, who presided over the last high-level climate negotiations in 2016, said he trusted that "the good sense and pragmatic spirit President Trump and his team" would prevail.

"It would be difficult, crazy, to go against public opinion, against the domestic will, and the will of the international community," Mezoua said in Bonn.

Some fear a US U-turn would dampen enthusiasm among other signatories for more efforts on emissions-cutting targets.

This is key, as current pledges place the world on track for warming much higher than the ceiling of two degrees Celsius (3.6 degrees Fahrenheit) written into the agreement.

The Trump administration has already proposed slashing funds for UN climate bodies, including the UNFCCC secretariat under whose auspices the negotiations take place.

The forum's budget is on the Bonn agenda.

On Monday, 200 global investors managing more than $15 trillion (13.7 trillion euros) in assets, urged the G7 group of rich countries, which includes the US, to "stand by their commitments".

"Global investors are eager to open their wallets to a low-carbon future," said Mindy Lubber, president of CERES, a non-profit organisation that works with North American companies on sustainability projects.

"But it won’t happen without clear, stable policy signals from countries worldwide -- in particular, the US government whose waffling on the Paris Climate Agreement is hugely troubling," she said in a statement.

It was not clear to what extent the US team was actively taking part in the latest talks.

"The US remains a party to the agreement and this implies that of course they have the right to have a seat at the table and to participate in all the discussions," UNFCCC executive secretary Patricia Espinosa told AFP.

"They have said that their position is under review, but this doesn't stop their commitments as a party to the process."

General » Be a reporter: Write and send your article » Subscribe for news alert
Tags: climate, warming, UN, US