Climate change, not poaching, the bigger threat to hawksbill turtles in Seychelles 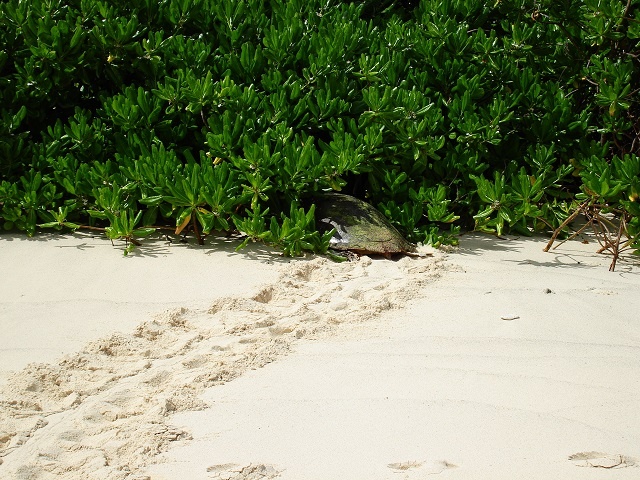 Conservation officers are still monitoring the location of the nests they have marked, and this is important as sometimes nests are disturbed by humans as well as other predators such as dogs. (Ministry of Environment and Energy)

(Seychelles News Agency) - Poaching is no longer the main threat to hawksbill turtles in Seychelles but rather the effects of climate change, a local conservationist said now that the nesting season has ended.

The conservation officer from the Seychelles’ environment ministry, Ashley Pothin, said that officials' increased presence on the beaches mostly frequented by turtles has helped to deter poachers and that there are now less poaching incidents compared to five years ago.

“The most worrying thing now is sea level and beach erosion. We had to relocate at least five nests threatened by high tides and waves. With the climate change, erosion of the coast is becoming a big concern,” said Pothin.

Hawksbills turtles, named because of their narrow pointed beaks, are found mainly throughout the world’s tropical oceans, predominantly coral reefs. They are listed as critically endangered on the red list of the International Union for Conservation of Nature (IUCN).

The turtle nesting season, which starts in October and ends in March, is the period conservation officers most closely monitor beaches all over Mahe, as well as on the two other main islands of the Seychelles, Praslin and La Digue.

Pothin said the conservation officers were on the beaches during the day, sometimes even at night, weekends and public holidays.

“We measured the turtles, looked at and recorded their tags if they had any, and also counted the number of eggs they laid. All the information was put in our database,” added Pothin.

The officers are still monitoring the location of the nests they have marked, and this is important as sometimes nests are disturbed by humans as well as other predators such as dogs.

Once the little turtles are hatched, they are counted and recorded, and then returned to the sea. “We also counted the number of eggs not hatched as this will give us an indication of how healthy the turtle population is,” Pothin said.

The Ministry of Environment of Seychelles, a group of 115 islands in the western Indian Ocean, said that the involvement of other partners in the turtle conservation is crucial.

One of the partners is the Marine Conservation Society Seychelles (MCSS) -- a not-for-profit organisation promoting conservation of the marine environment through education, research and the implementation of a number of programmes.

Vanessa Didon, project coordinator of the MCSS, said the organisation monitors some nesting beaches in the south of Mahe.

“The monitoring frequency is a minimum of three times a week during the Hawksbill nesting season, with the peak months being November and December. As for the green turtles, they are nesting all year round and do frequent the monitored beaches as well.”

Didon also said that there were three poaching incidents observed during the last nestling season.

“It is a good decline compared to last season. MCSS is working closely with the ministry of environment on the matter, and of course, the aim is to have everyone respecting the law which prohibits poaching of sea turtle.”

Sea turtles are protected under the Wild Animals and Birds Protection Act in Seychelles, and the poaching and killing of the sea creatures are illegal. Anyone found guilty of possessing turtle meat can be fined or sentenced to prison. Possession of turtle meat can carry a fine of around $37,000 (500,000 Seychelles rupees) or a two-year prison sentence.