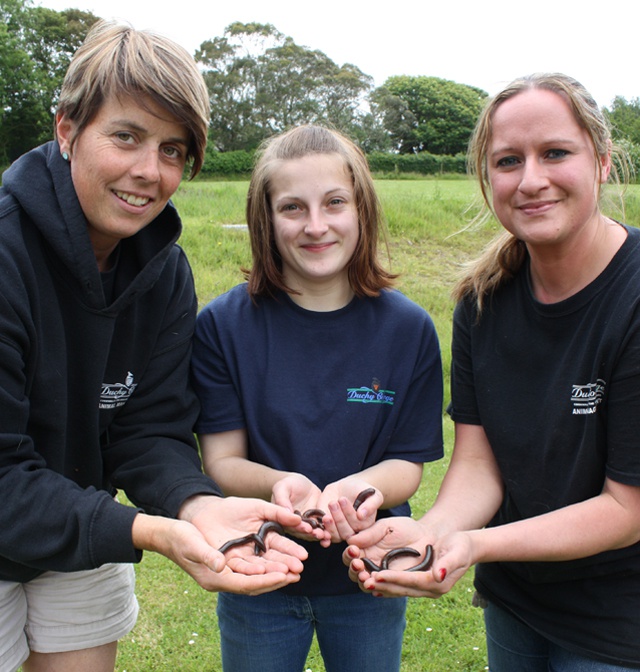 (Seychelles News Agency) - On the picturesque pastures of Cornwall, England, you are likely to find bright lilac cornflowers bobbing their heads in the windy green grassland. But on one particular farm, you might stumble across something entirely different – a glass aquarium filled with peat and swarming with hundreds of giant millipedes from the tropical Indian Ocean islands of the Seychelles.

If you’re squeamish about insects, this is perhaps the stuff your nightmares are made of, but for entomologists and conservation enthusiasts, this is a dream come true, because the Seychelles giant millipede, or Seychelleptus seychellarum, is classified as ‘vulnerable’ on the International Union for Conservation of Nature (IUCN) Red List of Threatened Species, only a small step away from becoming classified as ‘endangered’.

The agricultural school responsible for this little shop of vulnerable horrors, Duchy College Rosewarne, is delighted at the success of their breeding programme, which has thus far produced over two hundred offspring in the past two years alone – and all this from an original acquisition of only about a dozen adults from the London Zoo about eight years ago.

In an email interview by SNA with the college’s animal technicians Laura Fallow and Lucy Bennetts, it became clear that this breeding programme was no mean feat – it was the product of four years of trial and error until exactly the right conditions were found under which the millipedes would thrive.

“After a variety of trials we found the best method was to be a deep substrate of chemical free peat moss about two and a half feet deep in a glass aquarium layered with oak leaves and rotted wood kept in a room regulated at 24⁰C,” according to Fallow.

The technicians and their students need to give the millipedes a daily misting of warm water with fresh fruit and vegetables buried in the peat. Oak leaves are added to the mix have to first be freeze-dried to ensure they are entirely parasite-free.

The team found that the recipe for giant millipede breeding success was to clean the aquarium only once a year, with another partial cleaning halfway through the year, which allowed the millipedes to thrive in their own natural ecosystem.

Seychelleptus seychellarum is one of the largest millipedes in the world, regularly reaching over 15 cm in length. They feed on dead organic matter such as leaves and wood on the forest floor, and play a vital role in soil decomposition and plant nutrition, releasing nutrients from decaying organic matter back into the soil.

After numbers on the largest inhabited islands of Mahé and Praslin were decimated, the giant milipedes now only occur on the islands of Cousin, Cousine, La Digue, Silhouette, Félicité, Aride and Frégate, and their numbers are steadily declining.

On most of these islands they are now scarce, and concerns about millipede numbers were heightened by PhD student James Lawrence, who published his findings on research he conducted on the tiny 27-hectare island of Cousine in the Journal of Insect Behaviour in 2003.

The 'Seychelles giant millipede' is not only vulnerable to predation by rats and other mammals, but the slow-moving creature can also be crushed underfoot at night by people walking on dark footpaths.

Cousine is happily one of the few islands in the world that is free from rats, however, the introduction of alien plant species, such as bamboo and coconuts, were found by Lawrence to have negatively affected their foraging habits, with significantly lower numbers in the areas where bamboo was found.

As part of a conservation project on Cousine Island, bamboo was removed and native saplings were re-introduced to the cleared area. It is hoped that the millipedes will return and flourish once the canopy cover is restored. Great care is now also taken to avoid crushing this species along well-defined torch-lit footpaths on the island.

As for the offspring of the Duchy College breeding programme, some of them have already moved on to private collections as well as the local zoo.

“We would like to offer zoos around the UK and maybe further afield our surplus stock to educate and conserve this species so that the giant Seychelles Millipede can be successfully bred in captivity elsewhere,” Fallow said.

The technicians say they are keen to keep in touch with environmental authorities in the Seychelles for possible further breeding programmes or exchanges of information.