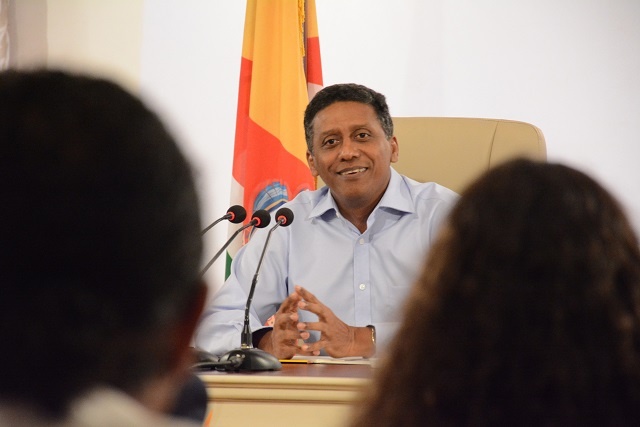 President Faure clarified the government’s decision to withdraw the candidacy of former minister of tourism, Alain St. Ange, in the election for the post of Secretary General.

Faure said if the government had not taken this decision, St. Ange would have been the head of this global organisation, but Seychelles would have suffered as a result.

“It was not a decision that was taken lightly but a decision had to be taken for the best interest of Seychelles,” said Faure.

The president said that the decision was taken to avoid putting the country in a situation where the well-being of Seychellois was being played with.

“As the President I could not let that happened as the communiqué addressed to me was very clear,” said Faure.

The hotel project at Grand Police in Takamaka, a district in the south of Mahe, the main island, is part of the 18 new tourism establishments excluded from the moratorium on the construction of large hotels. Recently there has been a petition on social media to prevent the implementation of the project. The group is seeking an appointment with the president.

“I have already confirmed with the people who had signed the petition that I will meet with them on Thursday to discuss the project,” Faure said.

Faure said the government is going to establish strict measures in regards to land allocation and that he will not tolerate abuse in any form. The head of state said he has been informed on certain cases of abuse.

“There are cases where there is proof and evidence of land that has been given and I have taken it up.”

The president added that all cases that have reached his office with evidence that the transaction was done as a result of abuse of power have been brought to the attnetin of the responsible minister to investigate.

Faure said that the Seychelles Constitution gives him the prerogative to do so and the six persons “had contributed immensely towards the country.”

Cohabitation between the Government and the National Assembly

Seychelles, a group of 115 islands in the western Indian Ocean, is in a political cohabitation. The majority of seats in the National Assembly are occupied by the opposition party – Linyon Demokratik Seselwa (LDS) – while the government is from the President’s Parti Lepep.

“I can say that we have all come to an agreement to work for Seychelles. In my personal view I can say that we are really doing it together. We can talk and disagree on so many things, but it is important for us to realize that the country is bigger than all of us. It is on this note that I will say that cohabitation is working perfectly,” Faure said.

A report released by the National Bureau of Statistics (NBS) after a poverty and equality survey carried out in 2013 found that around 40 percent of the 93,000 inhabitants of Seychelles are living below the poverty line. NBS placed the poverty line estimate at SCR 3,945 (around $300) per adult per month.

Faure said that in July when he will address the National Assembly he will give details on the work and measures that the government has taken to reduce poverty.