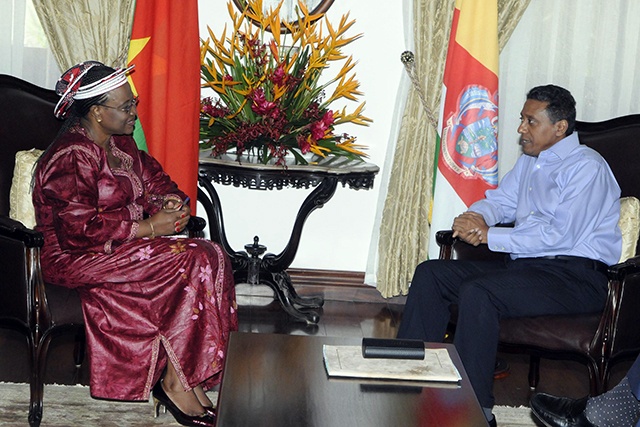 (Seychelles News Agency) - Burkina Faso’s first ambassador to Seychelles said the two countries can benefit from the exchange of commerce and culture.

“The people of Burkina Faso and Seychelles can benefit from the exchanges in the commercial, economical and cultural aspect as well as other domains that we can exploit. We do not want the cooperation to be uniquely political and diplomatically but to be beneficial for both countries,” said Sawadogo Tapsoba.

A press release from State House said that the ambassador "would do her best during her mandate to deepen relations and exchanges between the two countries. In this context, it was decided to work towards the establishment of a Framework Cooperation Agreement.”

State House said that Faure and Sawadogo Tapsoba also reaffirmed their commitment to multilateralism and their willingness to deepen their cooperation, particularly within the United Nations, the African Union and the International Organisation of la Francophonie.

Before the accreditation of Sawadogo Tapsoba, who will be based in Pretoria, Seychelles -- a 115-island archipelago in the western Indian Ocean -- was under the jurisdiction of the ambassador accredited to Addis Ababa.

Sawadogo Tapsoba said that after the new president of Burkina Faso, Roch Marc Christian Kaboré, was elected in 2015, there has been some readjustment in the countries diplomatic jurisdiction.

“[Our president] wanted us to bring the relations with the Republic of Seychelles further,” said the new ambassador.