Rebel chief on the run after DR Congo prison break 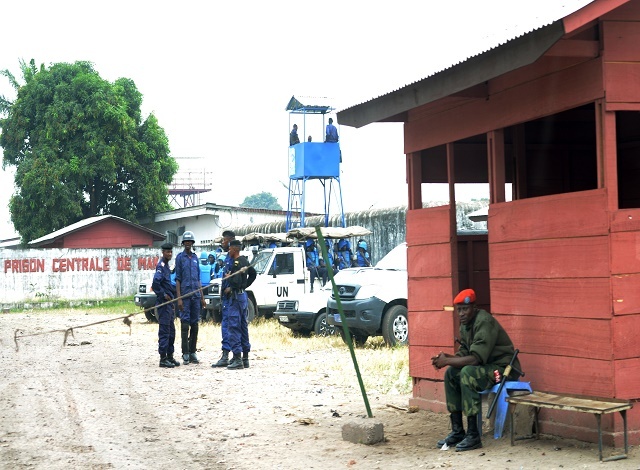 This file photo taken on July 2, 2013 shows Congolese police and UN soldiers standing guard after an incident at the Makala jail in Kinshasa. Rebels from an outlawed political-religious group attacked Kinshasa's central prison on May 17, 2017, breaking out their leader and about 50 other prisoners, the Congolese government said. "Followers of the Bundu Dia Kongo (BDK) attacked Makala prison at dawn and broke out around 50 prisoners including their guru, Ne Muanda Nsemi," government spokesman Lambert Mende said, indicating that police had given chase. (Junior D. Kannah/AFP)

(AFP) - Rebels from an outlawed political-religious group attacked Kinshasa's central prison on Wednesday, breaking out their leader and about 50 other prisoners, the Congolese government said.

The pre-dawn attack was carried out by a secessionist rebel group which rejects the authority of President Joseph Kabila's government and wants to set up a parallel state in the west of the country.

The date chosen for the assault is highly symbolic -- a public holiday marking 20 years since the overthrow of Mobutu Sese Seko, who had ruled the country with an iron fist for more than three decades.

Mobutu was ousted by rebel commander Laurent Desire Kabila, who changed the country's name from Zaire to Democratic Republic of Congo and is the father of the current president.

An MP, Nsemi is the spiritual leader of the BDK which is based in the southwest and seeks the restoration of the former Congolese kingdom inside pre-colonial boundaries that would include parts of Angola, Congo and Gabon.

In a video posted online in February, Nsemi called for an insurrection against Kabila after an abortive attempt at reconciliation. He was arrested in early March following a violent two-week siege of his home.

The government has blamed his followers for a string of violent attacks since the start of the year.

According to one escaped prisoner, the operation began "at around 4:00 am" (0300 GMT) with around 100 prisoners managing to flee in an account corroborated by local residents.

An AFP correspondent living several kilometres (miles) from Makala was woken up around the same time by the sound of automatic gunfire and several explosions.

One of the prisoners on the run told AFP he had managed to escape during violent clashes between the attackers and the prison guards.

Despite reports that several guards and prisoners had died in the raid, officials were unable to confirm the information.

By around 8:30 am, a column of thick black smoke could be seen rising over Makala prison, with dozens of police and soldiers blocking off all access to the facility.

Several hours later, an AFP correspondent saw police escorting some 13 escaped prisoners back to the facility.

A city official, speaking on condition of anonymity, told AFP that the women's section was empty. "All the inmates have escaped," he said, without stating how many women had been detained there.

Official sources say there are more than 8,000 prisoners locked up in Makala, which was built to house just 3,000 detainees when the country was under Belgian rule (1908-1960).

BDK stands for "Kingdom of the Kongo" in the Kikongo language, and its members want to restore an African monarchy that once included what is today Kongo Central (formerly Bas-Congo) along with parts of Angola, the Republic of Congo and Gabon.

The movement was banned in 2008 and later that year, the government began a violent crackdown on its followers after it staged a series of attacks targeting state actors and called for the expulsion of "non-natives" from the western province where it is based.

Kabila rose to power in 2001 after his father was assassinated.

Under the constitution, Kabila should have ended his mandate on December 20 but he managed to secure a controversial court ruling allowing him to remain in office until elections are held "at the end of 2017".