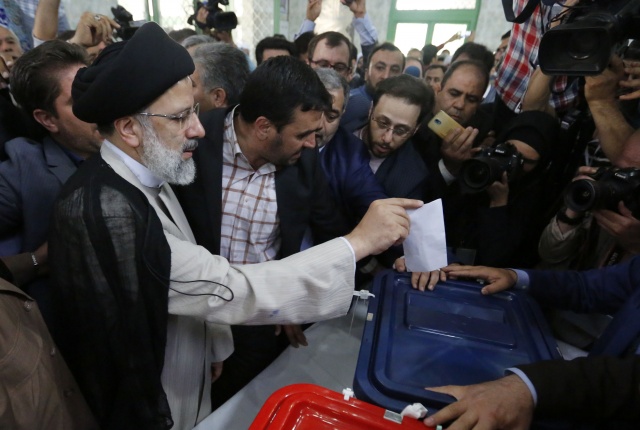 Iranian presidential candidate Ebrahim Raisi casts his ballot for the presidential elections at a polling station in southern Tehran on May 19, 2017. (ATTA KENARE / AFP)

(AFP) - Iranians poured into polling stations on Friday to deliver their verdict on President Hassan Rouhani and his troubled efforts to rebuild ties with the world and kickstart the struggling economy.

There was a festive atmosphere in Tehran where Rouhani, a 68-year-old moderate cleric who spearheaded a 2015 nuclear deal with world powers, was mobbed by cheering supporters as he cast his ballot in a mosque in the city centre.

"The enthusiastic participation of Iranians in the election reinforces our national power and security," he said, as polling stations reported queues were far bigger than in last year's parliamentary election.

Rouhani has sought to frame the vote as a choice between greater civil liberties and "extremism".

But he faces stiff competition from hardline cleric Ebrahim Raisi, 56, who has positioned himself as a defender of the poor and called for a much tougher line with the West.

"We must all respect the vote of the people," Raisi said as he cast his ballot in southern Tehran.

He has targeted working-class voters hit by high unemployment and subsidy cuts, as well as those who worry the values of the 1979 revolution are under threat.

"His main focus is deprived people and he wants to fight corruption," said Mohsen, a 32-year-old Raisi supporter.

"Rouhani did a lot of work that I praise him for, but we cannot rely on foreigners. Our country is surrounded by enemies -- if we don't strengthen our domestic situation, we will be harmed."

Rouhani's central achievement was a deal with six powers led by the United States that eased crippling economic sanctions in exchange for curbs to Iran's nuclear programme.

His opponent says he will stick by the nuclear deal, but points to a persistent economic slump as evidence Rouhani's diplomatic efforts have failed.

"Instead of using the capable hands of our young people to resolve problems, they are putting our economy in the hands of foreigners," Raisi said at a closing campaign rally in second city Mashhad on Wednesday.

Rouhani says hardliners must be kept away from Iran's diplomatic levers at a delicate moment in relations with the United States.

"One wrong decision by the president can mean war," he warned this week.

Rouhani gained a reprieve on Wednesday when Washington agreed to continue waiving nuclear-related sanctions, keeping the deal on track for now.

But US President Donald Trump has launched a 90-day review of the accord that could see it abandoned, and is visiting Iran's bitter regional rival Saudi Arabia this weekend.

Supreme leader Ayatollah Ali Khamenei cast his vote at his compound just minutes after polls opened, saying: "The destiny of the country is in the hands of Iranians."

Long queues formed at polling stations around the country after a short but gripping campaign that has again captivated the nation of 80 million.

"For me, Mr Rouhani's dialogue with the world and moderation in society are very important," said Zahra, a 32-year-old PhD student in food science at a Tehran polling station.

Under Rouhani's predecessor, hardliner Mahmoud Ahmadinejad, "the sanctions really hurt us. It was hard to get lab equipment and very difficult to get visas to study abroad. Now my colleagues can travel to France and the US," she said.

Despite the global implications, it is the economy that has dominated the campaign.

Rouhani has brought inflation down from around 40 percent when he took office in 2013, but prices are still rising by nine percent a year.

Oil sales have rebounded since the nuclear deal took effect in January last year, but growth in the rest of the economy has been limited, leaving unemployment at 12.5 percent overall, and almost 30 percent for young people.

Still, many appear willing to give his policies time to bear fruit, and hope Rouhani can lift the remaining US sanctions that are stifling trade.

"I'm voting for Rouhani to try to save my dignity. I hope we are not forced to leave the country," he said.

Meanwhile, Raisi has promised to triple cash handouts to the poor, hoping to pick up voters that once supported Ahmadinejad.

Having proved too independent for the conservative establishment, Ahmadinejad was dramatically barred from standing by the Guardian Council last month as it disqualified all but six of the 1,636 hopefuls who registered.

The presidential race has since narrowed to a two-horse race as other candidates either pulled out or backed Rouhani or Raisi.

Iranians are also voting for local councils, with reformists hoping to overturn the conservatives' narrow majority in the capital.

General » Be a reporter: Write and send your article » Subscribe for news alert
Tags: Iran, Vote