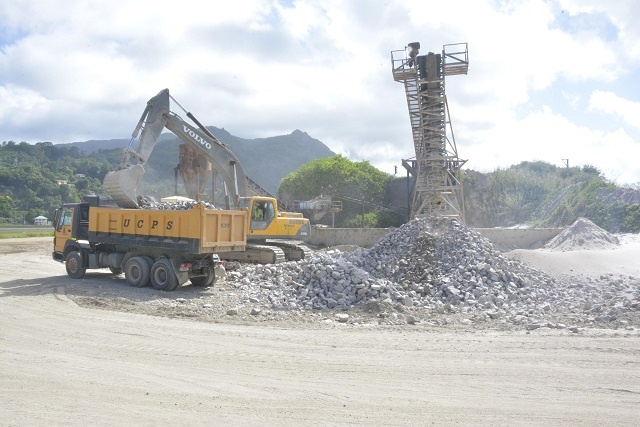 The announcement was made during a site visit by the Minister of Habitat, Infrastructure and Land Transport, Charles Bastienne to the UCPS’ Headquarter and the company’s quarry at Anse Des Genets, Pointe Larue. (Seychelles Nation)

“The area where our quarry is located consists mainly of soil and this is not the type of area suitable for quarrying. I hope that the government is going to help us solve the quarry problem that we have been experiencing for the past few years,” said Joseph Albert, the chair of UCPS.

Albert said that while quarrying, they extract only 40 percent rock to work with, as the other 60 percent is soil and this is expensive and inefficient quarrying.

The announcement was made during a site visit by the Minister of Habitat, Infrastructure and Land Transport, Charles Bastienne to the UCPS’ Headquarter and the company’s quarry at Anse Des Genets, Pointe Larue.

It was part of Bastienne’s familiarisation visits aimed at getting a better insight of the different construction companies involved in producing materials in Seychelles, an archipelago in the western Indian Ocean.

“It has been echoed by Mr. Albert today that there is a necessity to obtain a proper area for them to extract materials much more efficiently. From what I have been told and seen, UCPS will soon be in trouble if the government does not make certain decisions to assist the company,” said Bastienne.

Albert explained that it takes a minimum of two years to open a quarry and “even if at this current moment in time, a quarry is allocated, we will have to close down.”

He added that “The area where we are working does have lot of rocks but unfortunately it is out of our working zone. It is a question of seeing how we can, in a partnership, quarry the area, allowing us to acquire rocks until the moment when we can move to the new quarry.”

Negotiations are ongoing between the company and the government to find a long term solution, so as to avoid a shortage of construction materials in the country.

“We will find a short/medium term solution for Mr. Albert,” said Bastienne adding that he is aware that the company and the government has been holding discussions about a potential quarry at Au Cap for over 15 years.

The site at Au Cap has not yet been approved to be turned into a quarry as there are some studies and consultations still being carried out, said the minister.

During the visit it was outlined that the government can also benefit if UCPS continues quarrying at the South East Island, located off the coast of Point Larue’s airport runway.

Despite the problems the company is facing, UCPS lowered the prices of their products in April. This was done shortly after another company Civil Construction Company Limited (CCCL), announced its 10 percent reduction in their prices.