Up to 200,000 protesters march against Venezuela's Maduro 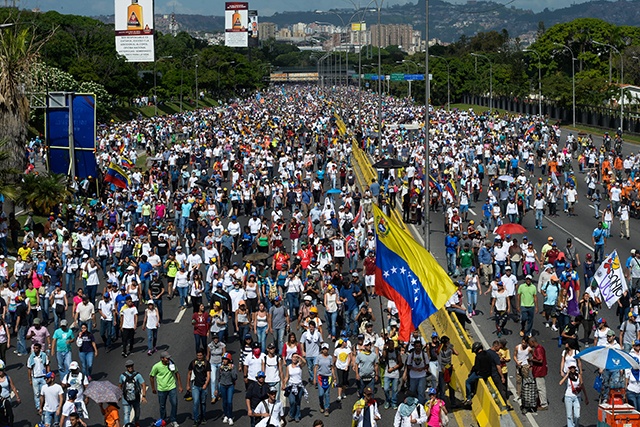 Opposition activists block the Francisco Fajardo main motorway in eastern Caracas on May 20, 2017 to protest against President Nicolas Maduro. Venezuelan protesters and supporters of embattled President Nicolas Maduro take to the streets Saturday as a deadly political crisis plays out in a divided country on the verge of paralysis.
FEDERICO PARRA / AFP

(AFP) - More than 200,000 protesters took to the streets of Venezuela on Saturday, day 50 of an angry and sometimes deadly showdown with the unpopular President Nicolas Maduro.

As with many of the previous marches in the crisis-hit country, police fired tear gas at protesters in the capital suffering from dire shortages of the most basic of goods.

The opposition blames Maduro for the economic mess in oil-rich Venezuela, demanding early elections to replace the socialist who took over from the late Hugo Chavez. Seven weeks of street protests have left 47 people dead.

In Caracas alone, some 160,000 marched through the city trying to reach the Interior Ministry in the city center, said Edinson Ferrer, spokesman for the opposition coalition MUD, citing a preliminary estimate.

At least 46 people were injured in the eastern district of Chacao, the authorities said, including a woman hit by a vehicle.

Riots were taking place on the city's outskirts overnight.

In the western city of San Cristobal in Tachira state, an estimated 40,000-plus took to the streets. Maduro ordered 2,600 soldiers to Tachira this week to quell street violence and looting.

In Caracas, demonstrators carried signs that read "#We are millions against the dictatorship" and "#No more dictatorship!"

The protesters blame Maduro for shortages of food, medicine and such basics as soap and even toilet paper, saying he is manoeuvering to dodge calls for early elections.

The red, blue and yellow colors of the Venezuelan flag were painted on her face.

"This has been a massacre against the people," opposition leader Henrique Capriles said before the march got underway.

"Still, the more repression there is, the more we will resist and fight for Venezuela," he added.

One of Capriles's lawyers delivered a report on the Venezuelan crisis to the United Nations High Commissioner for Human Rights on Friday after Venezuelan officials "canceled" the opposition leader's passport, preventing him from flying to New York.

The turnout for Saturday's demonstrations came close to the biggest rally during seven weeks of protests, when several hundred thousand people came out on April 19. The demonstrations have degenerated into violence that, besides the 47 dead, has left hundreds injured, 2,200 detained and some 161 imprisoned by military tribunals.

On the other side of town, some 2,000 pro-government workers sang and danced as they staged a rival march to show their support for the president's controversial plan to elect a constitutional assembly to rewrite the constitution.

Maduro had been scheduled to welcome the workers at the Miraflores presidential palace, but the marchers did not end up seeing the president.

Venezuela is bitterly divided as locals bridle under all the shortages, soaring inflation -- prices could rise by 720 percent this year, the IMF estimates -- and some of the world's highest crime rates.

As protests have turned violent, an increasing number of gunshot wounds have been reported. Federal prosecutors said they are investigating the role of police and military personnel in the incidents.

Some of the shootings took place in Tachira state, near the border with Colombia, where Maduro deployed soldiers this week after riots and looting.

Protests have swelled since Maduro called for convening a "popular" assembly to rewrite the Venezuelan constitution, with half its members coming from sectors loyal to him.

The opposition says the assembly would allow Maduro to avoid elections. He denies that and has "guaranteed" that presidential elections will be held next year, as required by law.

Maduro insisted Friday that the "popular" assembly would provide a "path to peace, dialogue and consensus," while the opposition, he said, was offering only "violence and death."

Analysts say the opposition's biggest challenge will be to keep their marches peaceful.

Protests succeed only when they are massive and persistent, said Luis Vicente Leon, who heads the Datanalisis polling firm. He warned that when demonstrations turn violent, they "lose impact."

Seven in 10 Venezuelans reject Maduro's leadership, according to private surveys, amid widespread economic devastation aggravated by the drop in the prices of oil -- Venezuela's chief revenue source -- in 2014.

That has left Maduro heavily dependent on military support.

Opposition protests grew after the country's Supreme Court on March 30 assumed some of the functions of the National Assembly.