China, DR Congo most affected by displacements in 2016: report 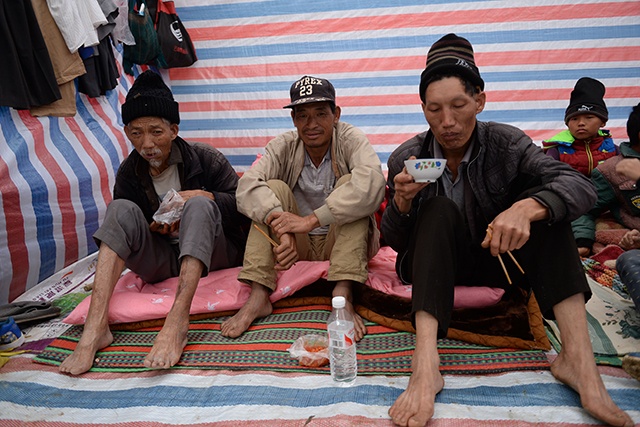 his picture taken on November 24, 2016 shows refugees from Myanmar eating in a temporary shelter across the border in Manghai, in southwest China's Yunnan province. At least 3,000 people have fled into China due to fighting in northern Myanmar, Beijing said on November 22, as the death toll from clashes between the military and ethnic insurgents rose to 10. The violence is a fresh blow to de facto leader Aung San Suu Kyi's hopes of forging a nationwide peace agreement after decades of bloody insurgencies in Myanmar's borderlands.

(AFP) - More than 31 million people were displaced in their own countries by conflict, violence and disasters in 2016, with China and the Democratic Republic of Congo among the worst affected, a new report by a monitoring center said Monday.

The Democratic Republic of Congo had a spike of 922,000 new displacements caused by conflict last year, more than Syria with 824,000 and Iraq with 659,000, said the Internal Displacement Monitoring Center of the Norwegian Refugee Council (NRC).

Disasters displaced three times more people than conflicts, with most of the 24 million people affected hit by sudden-onset weather hazards such as floods, storms, wildfires and severe winter conditions.

China tops the list of new displacements due to disasters, with 7.4 million people driven from their homes, followed by the Philippines (5.9 million), India (2.4 million) and Indonesia (1.2 million).

These displacements are expected to increase in the future as the impact of climate change becomes more acute, said the report.

Jan Egeland, the head of the NRC, said the shocking figures show the need to focus as much on people displaced inside their countries than on refugees who flee across borders.

"Internally displaced people now outnumber refugees by two to one. It is urgent to put internal displacement back on the global agenda," said Egeland.

Of the 6.9 million people driven from their homes due to conflict, 2.6 million live in sub-Saharan Africa.

Internal displacement is overshadowed by the current global focus on refugees and migrants, said the monitoring centre.

More aid was spent last year on refugee resettlement than in the countries where the crises began, it added.

There was a total of 40.3 million people displaced by conflict and violence in their countries by the end of 2016 -- a figure that has nearly doubled since 2000 and has increased sharply over the last five years.