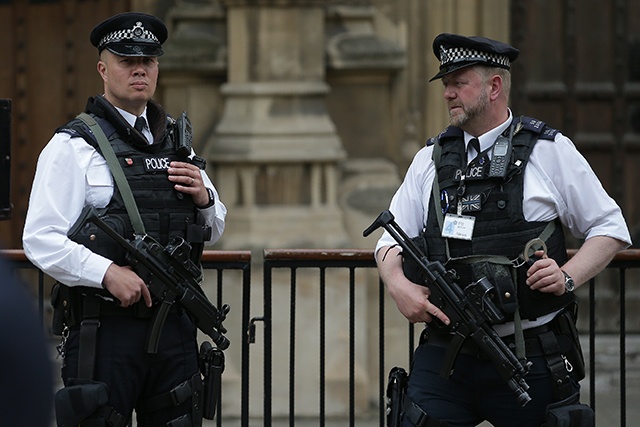 Armed British Police officers stand on duty outside of the Houses of Parliament in Westminster, central London on May 23, 2017, following the terror attack at the Ariana Grande concert at the Manchester Arena in Manchester on May 22. (DANIEL LEAL-OLIVAS / AFP)

(AFP) - Britain raised its terror threat level to "critical" on Tuesday, meaning a new attack is believed to be imminent, and soldiers are being deployed to assist armed police, British Prime Minister Theresa May said.

"It is a possibility we cannot ignore that there is a wider group of individuals linked to this attack," she said after a suicide bomber killed 22 people, including children, at a pop concert late Monday in Manchester.

Addressing the nation from her Downing Street residence, May said armed police who would usually protect strategic points would be replaced by members of the armed forces under Operation Temperer.

"This means that armed police officers responsible for duties such as guarding key sites will be replaced by members of the armed forces, which will allow the police to significantly increase the number of armed officers on patrol in key locations."

"You might also see military personnel deployed at certain events such as concerts and sports matches, helping the police to keep the public safe," she said.

The last time the alert level was raised to critical in Britain was in June 2007 after an attempted car bombing at Glasgow Airport.

"The spirit of Manchester and the spirit of Britain is far mightier than the sick plots of depraved terrorists. That is why the terrorists will never win and we will prevail," May said.