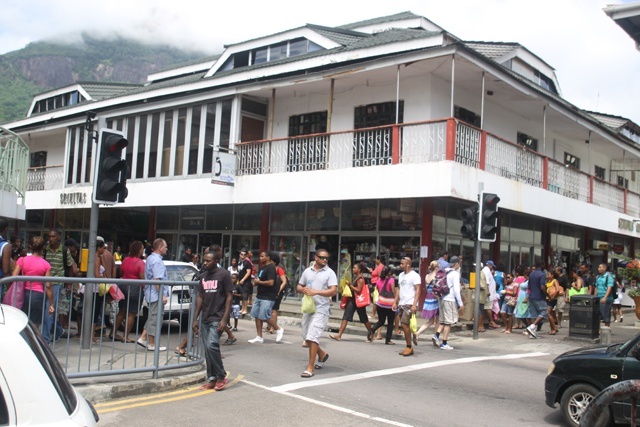 People going about their daily business in the Seychelles capital, Victoria (Joe Laurence)

(Seychelles News Agency) - A new study to pinpoint the cause of poverty has started in four central districts on the Seychelles’ main island, Mahe, where the highest percentage of people in poverty live.

A 2013 survey by the National Bureau of Statistics found that 52 percent of residents in the districts of Plaisance, Les Mamelles, Roche Caiman and Mont Fleuri live in poverty. The poverty line is defined as SCR 3,945 (around $300) per adult per month.

Seychelles’ President Danny Faure appointed Dick Esparon, a former ambassador, as the Secretary of State for the Department of Poverty Alleviation in October last year.

Esparon told reporters on Tuesday that part of his office’s mandate is to set out the extent, causes and effects of poverty in Seychelles. This will be done through a four-week survey started this week by NBS in close collaboration with the local government department, he said.

“We know that there was an outcry when the first reports about poverty were released, we now need to go down to grassroots communities in specific areas of these four districts.”

Esparon added that “this is important because we want to use our limited resources to pinpoint and zoom in on the specific target population, identify who are those affected among the population, to what extent and what are the causes and risk factors contributing to their status of being classified as poor. “

Helena De Letourdis, deputy chief executive of NBS, said a lot of information can give the right indicators to establish poverty level, but this profiling is using a targeted approach.

“We are giving the government information on who are the people living in situations classifying them as poor, what led or what has caused these people to be living in those situations,” said De Letourdis.

The deputy chief executive added that “We are using the local knowledge of people from the district administration because they know firsthand where people classified as poor are, so in each districts we have put together different hot spots, where the survey will be conducted."

De Letourdis said that in the survey NBS will be looking at the demographic structure, ages of minors and who among them need child minders or are all at school and who is heading the family, including whether one or two parents are present.

“Then we will look at the socio-economic factors, are the adults working, are they on welfare, are alimony or child support being paid, does the family have a home garden, what are their expenses, and also what are social factors putting the family at risks and affecting their budget and livelihood,” De Letourdis said.

Around 50 people will help carry out the survey, whose results will be announced in about three months.

Esparon said the findings will clearly identify the contributing factors for effective intervention to remedy the situation.

“My office will then use a multi-sectoral approach to alleviate poverty and improve the social wellbeing of the most vulnerable people of the island nation,” he said.

The detailed data will be used to develop programmes which will complement existing services and programmes supporting individuals and families to improve their standard of living.