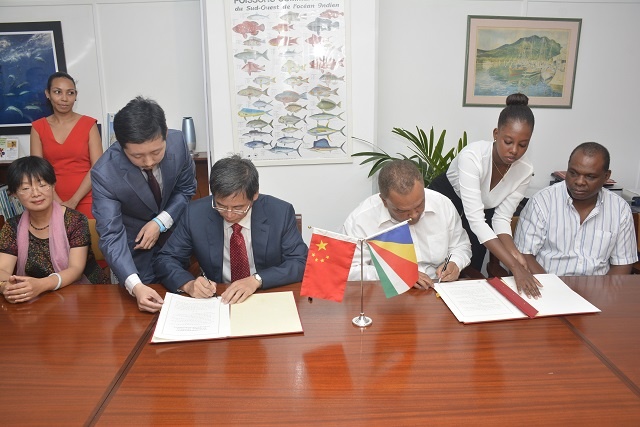 The agreement was signed at the office of the Ministry of Environment, Climate Change and Energy at le Chantier Mall. (Seychelles Nation)

(Seychelles News Agency) - Curieuse Island and 41 schools in Seychelles are set to become more energy efficient through an agreement signed between the Environment Ministry and the Chinese department of Climate Change National Development and Reform Commission on Tuesday.

The principal secretary for climate change and energy, Wills Agricole, said the agreement serves as a key to unlock at least 30 million Chinese yuan, around $4.3 million, as a grant from the Chinese government to accelerate the transition to a low-carbon economy.

Under the agreement -- Curieuse, an island close to Praslin, the second-most populated island of Seychelles -- will benefit from 96 solar panels that will meet its total energy demand.

Agricole said, “Currently electricity is being produced using generators burning gasoline. They are very noisy and do not give a good impression when tourists visit the island.”

“Curieuse spends around $7,500 per year to generate electricity and this money can now be saved for environmental conservation efforts,” added the principal secretary.

“This will allow school establishments to reduce their overall electricity expenses. It will help educate the youth on the theoretical and practical aspects of PV (photovoltaic) and, incorporate renewable energy technologies into school curriculums,” Agricole said.

The principal secretary said that the equipment will contribute to the mitigation and adaptation of climate change by reducing the emissions of greenhouse gases in Seychelles and helps adapt to the adverse impact of climate change.

The agreement was signed at the office of the Ministry of Environment, Climate Change and Energy at le Chantier Mall.

The Chinese representative Nanjie said the equipment given through the agreement will help the island nation to reach a low-carbon path way.

“Our aim is to ensure that small island states becomes more eco-friendly in their outset. We visited some of the schools two weeks ago to understand their technological needs for renewable energy,” said Nanjie.

The National Energy Policy of Seychelles, a group of 115 islands in the western Indian Ocean, has set a target of producing 15 percent of the national energy demand from renewable sources by 2030.

Agricole said this project will contribute towards reaching that target.

Seychelles has a long history of cooperation with China since the two countries established diplomatic relations in 1976 and tourism, health, defense, education, construction are some of the existing areas of bilateral cooperation.