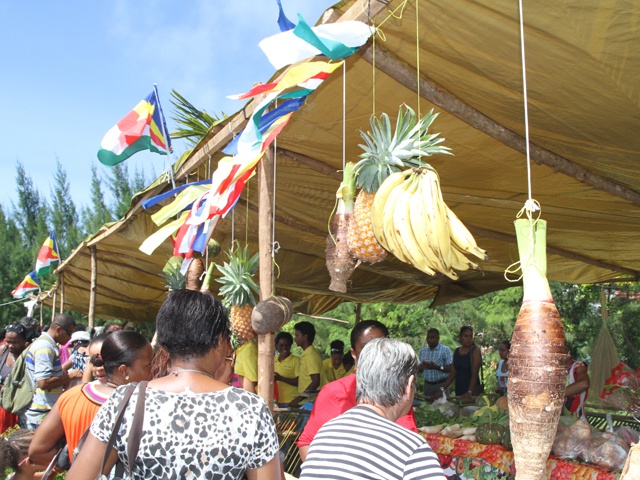 Visitors to the first Agricultural and Horticultural show on the island of Praslin viewing the fruits, vegetables, and other interesting exhibits (Mervyn Marie, Seychelles News Agency)

(Seychelles News Agency) - The best of fruits, vegetables, flowers that are grown and the best chickens, cows, goats and other animals reared mainly on the Seychelles’ second and third most populated islands of Praslin and La Digue went on display today.

After having been one of the highlights of the Seychelles National Day Celebrations on the main island of Mahé for fourteen years in total, the famous Agricultural and Horticultural show moved to the second most populated island of Praslin for a first time this year.

People from Praslin, those from La Digue situated just 15 minutes away by boat and even some from the main island of Mahé lying one hour away could be seen hurrying down to the reclaimed land of Eve Island close to the jetty at Baie St Anne for the opening of the show this morning.

With the cool breeze of the South East Monsoon calming down the heat it was the perfect weather for such an outing.

Whilst fruits and vegetable trees, potted flowers, locally produced food items amongst others were on sale in the non-competitive section there were also 35 competitive categories.

Fruits and vegetable display, flowering and non-flowering plants, spices, and a first time for the Agricultural and Horticultural show a display of fisheries products spread out in five categories.

Seychelles President James Michel and his daughter Laeticia also joined the show, touring the different stalls taking a peek at the products of the islanders’ hard labour in the fields and their creativity.

The organisers have expressed satisfaction with the level of participation which they say surpassed their expectations.

“We must really congratulate the Praslinois and Diguois. For this first time the show is moved to Praslin from Mahé we were not expecting such amounts of exhibits and participants,” the Chairman of the organising committee of the first Agricultural and Horticultural show on Praslin Antoine Marie Moustache told SNA in a phone interview.

Those who toured the different stalls apart from leaving with their purchase of potted fruit trees, spices, flowers, coconuts and other plants or a live chicken for that matter, could also get to know the winning exhibits in each category, as this was already displayed.

The products were being judged especially in terms of their quality and class for example the fruits and animals had to be without defects.

“Since yesterday the judges had seen the different products and had worked on identifying the best displays. In each category there is a first, second and third prize. But the competition was so good that we even introduced a 4th prize for merit……only the fisheries categories have not been judged,” added Moustache.

Farmers and horticultural enthusiasts on Mahé had also been invited to take part but not so many made the trip to Praslin.

“A few participants from Mahé are taking part in the show…we were hoping for more participation as in the past people from Praslin made the trip to Mahé for the show….we hope that next time there will be more interest,” said Moustache.

The Praslin Agricultural and Horticultural Show will come to an end tomorrow at 3pm local time.