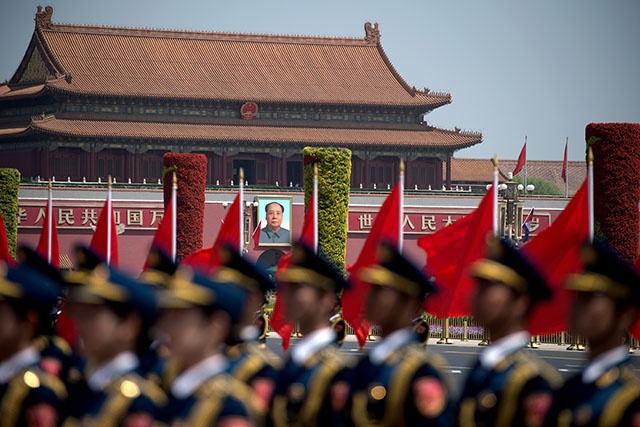 (AFP) - China on Thursday accused the US of trespassing after an American warship sailed near a reef claimed by Beijing in the South China Sea, the first such operation by President Donald Trump's administration in the disputed waterway.

The row comes during a period of warming relations between the countries with Trump saying that Washington has dialed down pressure on Beijing over other issues in hopes of securing their cooperation on North Korea.

The guided-missile destroyer USS Dewey entered the area "without permission from the Chinese government", Foreign Ministry spokesman Lu Kang told reporters at a regular press briefing, adding that the ship had "trespassed in the waters near the relevant islands and reefs".

"The relevant action taken by the US vessel undermines China's sovereignty and security interests, and is very likely to cause unexpected sea and air accidents," he said, urging Washington to stop "provocative actions".

The USS Dewey sailed less than 12 nautical miles from Mischief Reef -- part of the Spratly Islands -- on Thursday morning local time, a US official said earlier, the first freedom of navigation operation under Trump. The UN says nations can establish the breadth of their territorial sea up to a limit of 12 nautical miles.

China claims nearly all of the South China Sea, despite partial counter-claims from Taiwan and several southeast Asian nations including the Philippines, Brunei, Malaysia and Vietnam.

It has rapidly built reefs into artificial islands capable of hosting military planes.

The US has challenged annexations of these islets and advocated for a diplomatic settlement to the disputes.

Speaking earlier in the day, Pentagon spokesman, Major Jamie Davis, said US forces operate in the South China Sea on a daily basis and will fly and sail "wherever international law" allows.

"We have a comprehensive Freedom of Navigation Operations program that seeks to challenge excessive maritime claims in order to preserve the rights, freedoms, and uses of the sea and airspace guaranteed to all nations under international law," Davis said in a statement to AFP.

The exercises are "not about any one country, nor are they about making political statements," he added.

The US operation came a week after the Pentagon said that Chinese jets conducted an "unprofessional" intercept of a US radiation sniffing plane.

China denied the accusation, with the Ministry of Defense saying Thursday that "the close reconnaissance activities conducted by US military ships and planes towards China are the root cause of the security issues between China and the US over the sea and in the air."

Relations between Washington and Beijing had warmed in recent months, with Trump trading his once fierce rhetoric about the country for glowing compliments.

Since meeting with President Xi Jinping in April, Trump, who once accused China of "raping" the US, has praised its leader as a "good man", saying it would be inappropriate to pressure Beijing while Washington is seeking its help with North Korea.

Thursday's operation may be an indication that Trump's patience is wearing thin.

But James Char, a China analyst at Singapore's Nanyang Technological University, said the manoeuver was just the US signalling that it is a "credible strategic guarantor to its allies" in the region.

"For now, I do not see this as a sign marking the end of the goodwill cultivated between Trump and Xi," Char told AFP.

Washington has long argued that Beijing's actions in the South China Sea threaten freedom of navigation and overflight through the strategically vital waters.

China denies these claims, countering that the US is eager to stoke tensions in the region.

Last week, Beijing and the Association of Southeast Asian Nations (ASEAN) agreed on a framework for creating a new code of conduct for ships and aircraft operating in the region.

"The situation in the South China Sea is cooling down and showing positive signs of development," the foreign ministry spokesman said.

"What the US has done is cause severe disruptions to this process of dialogue and consultation. It will bring itself no good while hurting others."