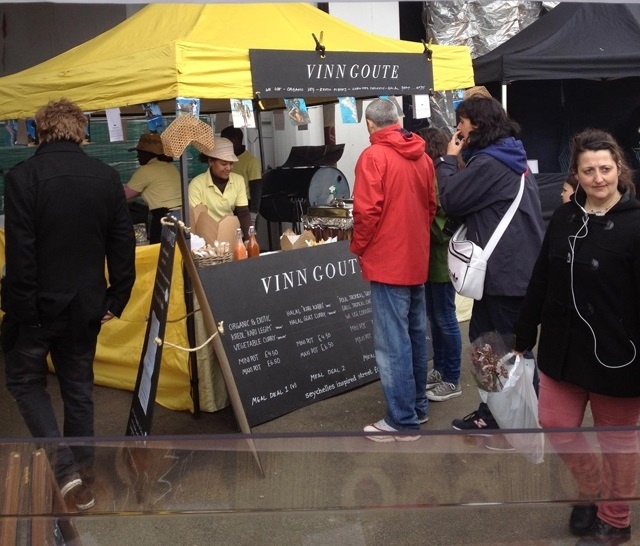 Vinn Goute owned by a Seychellois family living in London ventured into the street food business in 2011. (Kristofer Adelaide)

(Seychelles News Agency) - As London readies for summer 2017 to set in, a Seychellois family living in the UK capital is also gearing up to once again bring out their pop-up kitchen to offer a taste of the Seychelles’ cooking.

Dubbed ‘Vinn Goute’ in the Seychellois Creole language -- meaning ‘Come and Taste’ -- the food stall made its debut at the Notting Hill Carnival in 2011.

Since then, the family venture has been part of London’s street food network, popping up at festivals and other events around the UK, especially during the summer months.

Kristofer Adelaide who describes himself as the front man responsible for getting the group to events told SNA that they already have their work mapped out for this year.

Adelaide, an architect by profession, was, in fact, the one who came up with the idea of going into the street food business along with his sister Julie and aunt Maria.

The idea was born after they observed how friends who often came to the aunt’s house for parties -- filled with Seychelles’ cuisine -- would bring containers to take home any food that was left over.

“That’s when we said wait a minute, this is a business here, let’s bring some Seychelles dishes to the masses of London,” said Adelaide.

The aroma of the grilled fish, curried octopus or goat that would make the mouth of any Seychellois water with excitement are some of the dishes that occasionally feature on their menu.

“We are a street food company but have a massive list of great Seychelles dishes we can offer... So we need to pick the right ones for the right event. We usually get it right,” said Adelaide, adding that their client’s favourite are the curried goat, the grilled trevally [one of the most consumed fish in Seychelles] and chilli cakes.

Vinn Goute which has catered for an array of big events, private functions, wedding, and festivals is said to have been well received by both the Seychellois community living in the UK and the British public.

“People are intrigued by the wonderful tropical flavours and the types of fish we present,” Adelaide told SNA.

When it comes to sourcing the right ingredients that would provide the desired taste of the Creole menus, he explained that the UK has some good markets, which sometimes even supply fish directly from Seychelles.

“But this cost a lot more, so we sometimes substitute for products from other Indian Ocean territories or make amazing dishes with octopus from Cyprus for example.”

With street food being quite a popular and competitive venture in the UK, Adelaide said that their “unique menu” is what gives them an edge over the other pop-up kitchens.

“We all do this with a passion. So we work seasonally, usually during the summer month and hibernate in the winter. In terms of profit, if we took it up full time, there is great potential,” he added.

The business name ‘Vinn Goute’ was born from what Adelaide remembers his grandmother calling out to them each time she had prepared a dish at her home in Seychelles.

Looking to the future, Adelaide and team are hoping that more people would come and try out their food, while they also consider the possibility of having a permanent outlet for their Creole menus soon.

People wanting to know where to find the Seychelles’ street kitchen in the UK can look up: