Stormy climate at G7 as Trump goes his own way 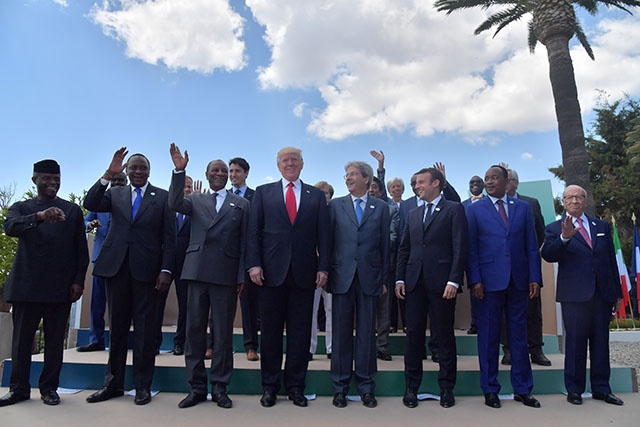 Leaders of the G7 and leaders of some African countries that have been invited for the two-day talks pose for a family photo on the second day of the G7 summit of Heads of State and of Government, on May 27, 2017 in Taormina, Sicily. From left 1st row : Vice President of Nigeria Yemi Osinbajo, Kenya's President Uhuru Kenyatta, Guinea's President Alpha Conde, US President Donald Trump, Italian Prime Minister Paolo Gentiloni, French President Emmanuel Macron, Niger's President Mahamadou Issoufou and Tunisian President Beji Caid Essebsi.
Tiziana FABI / AFP

(AFP) - G7 nations on Saturday were deadlocked over climate change as US President Donald Trump rebuffed pressure to toe the collective line in the club of powerful democracies.

Delegates from the Group of Seven leading economies said a closing summit statement to be issued later Saturday would acknowledge only that six members were committing to upholding the Paris climate accord on curbing emissions, while the United States continues to reflect on the matter.

G7 leaders began the concluding day of their annual summit in discussions with leaders from Ethiopia, Kenya, Niger, Nigeria and Tunisia.

The five African states are key players in the Mediterranean migration crisis, as countries of origin or transit for hundreds of thousands of migrants attempting to reach Europe via perilous crossings of the Mediterranean.

The G7's Italian presidency placed this year's summit in Sicily to underline the proximity of the crisis.

But even that has prompted discord among participants as Trump, according to Italian sources and activists, resists the hosts' desire to issue a declaration underlining the benefits as well as pitfalls of migration.

That sort of language is anathema to a White House that wants to impose a ban on travellers from six Muslim-majority countries.

An enduring motif of the G7, which represents the lion's share of global economic output, has been to champion free trade.

At last year's summit in Japan, leaders issued a lengthy communique in support of resisting protectionism, as well as helping refugees and fighting climate change.

But that was then, when Barack Obama still occupied the White House. Today, his successor is defiant about stepping out of the G7 line.

"His basis for decision ultimately will be what's best for the United States," his top economic advisor Gary Cohn said at the talks in Sicily's ancient hilltop resort of Taormina.

Cohn was referring to whether Trump would execute his campaign threat to walk away from the Paris accord on combatting climate change, after arguing that global warming is a hoax concocted by China.

But his language also summarises the "America First" platform that elevated the property tycoon to victory in last year's presidential election.

The G7 was also unlikely to reprise its oft-used terminology against protectionism, after Trump reportedly described the Germans as "bad, very bad" in their trade practices while visiting Brussels this past week.

In a telling measure of the new state of affairs, the Italians say they expect the final statement to come in at just six pages when it is released on Saturday afternoon -- down from 32 pages last year.

The summit did find common ground on Friday in endorsing a British call urging internet service providers and social media companies to crack down on jihadist content online, after 22 people were killed in a Manchester concert bombing in northwest England this week.

The G7, urged on by Japan, will also adopt common language against North Korea after a series of missile tests by the nuclear-armed nation.

Friday's discussions in Sicily ended with a classical music performance in the shadow of an ancient Greek theatre and the smoking volcano of Mount Etna.

Trump, however, seems bent on singing from a different song sheet, leaving the G7 bereft of a concerted voice as Russia and China are heard loudly offstage.

Other voices are also sounding more loudly as investigations proceed in Washington into whether Russia meddled to help Trump's election victory last year.

New revelations came overnight with The Washington Post reporting that Trump's son-in-law, Jared Kushner, made a pre-inauguration proposal to the Russian ambassador to set up a secret, bug-proof communications line with the Kremlin.

There was no immediate comment from the White House, but Trump has angrily rejected allegations of such collusion, and was expected to quit Sicily without giving the kind of closing news conference that is customary among the G7 leaders.