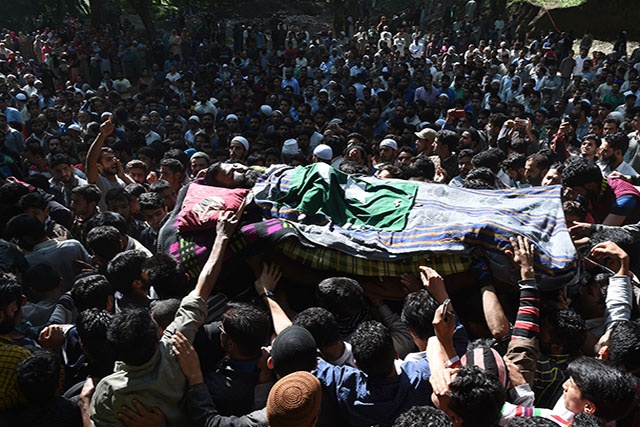 Indian Kashmiri villagers carry the body of rebel commander Sabzar Ahmad Bhat during his funeral in Rathsuna Tral, near Srinagar, on May 28, 2017  (TAUSEEF MUSTAFA / AFP)

(AFP) - Authorities clamped a curfew across most of Indian-administered Kashmir for the first day of the Muslim Ramadan festival Sunday and partially cut telephone services to thwart protests over the killing of a top rebel commander.

The lockdown in the mainly Muslim region crippled life on the first day of the Islamic holy month after widespread violence on Saturday over the killing of Sabzar Ahmad Bhat in a gunfight with government forces.

Government forces in riot gear erected barricades in the main city, Srinagar, and other towns in southern Kashmir to prevent people from reaching the commander's funeral.

But thousands of mourners defied the security curbs Sunday to attended the burial of the rebel commander in his hometown amid anti-India and pro-Independence slogans.

Srinagar's central mosque remained shut and devotees were barred from offering prayers on the first day of the Ramadan fasting period.

"Restrictions have been put in place in some areas to maintain law and order," police chief Shesh Pal Vaid told AFP.

Bhat, head of the Hizbul Mujahideen militant group, and a 16-year-old associate were killed in a gunfight near his native village in Tral area.

A protester was shot dead by troops during clashes as hundreds of villagers tried to break the security cordon to help the militants to escape. Clashes spread to other districts, leaving dozens injured.

"Forces have blocked all roads to restrict people to their areas," Bashir Ahmad, a resident of Pulwama told AFP, a neighbouring district of Tral.

Anti-India sentiment runs deep in the Kashmir valley, where most people favour independence or a merger with Pakistan.

Kashmir has been split between India and Pakistan since the end of British colonial rule in 1947, with both nations claiming it in its entirety.

An armed rebellion broke-out in 1989 that later weakened. But over the last year there has been an upsurge in protests against Indian rule.

Several armed groups are fighting Indian forces. Tens of thousands of people, mostly civilians, have been killed in the nearly three decade-old conflict.