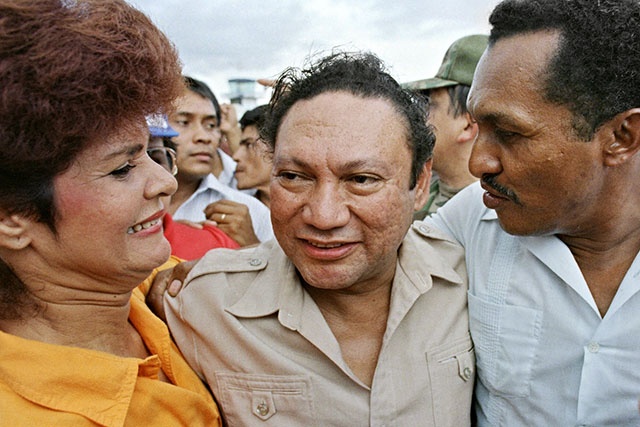 (FILES) This file photo taken on June 14, 1987 shows Panamian military strong man General Manuel Antonio Noriega with supporters upon his arrival in the small remote city of David, about 350 kilometers from the capital, Panama City. Manuel Antonio Noriega, who took power in Panama in 1983 and was ousted by US forces in 1989, died late Monday, May 29, 2017 in Panama City, a government official said. He was 83. Noriega was in a hospital recovering from a brain tumor operation. The announcement was made by government communications secretary Manuel Dominguez.

Noriega, 83, passed away in the Panama City public Santo Tomas hospital where he had been recovering from early March surgery to remove a brain tumor, and a subsequent operation to clean up cerebral bleeding.

The announcement of his death was made by government communications secretary Manuel Dominguez.

Noriega had been serving prison time for murder and forced disappearances during his dictatorship, and was being held in a prison cell overlooking the Panama Canal.

The ex-strongman had been granted temporary release on January 28 to undergo the medical procedure.

Following years of ill-health that included respiratory problems, prostate cancer and depression, Noriega's family pleaded with authorities to him to serve the rest of his sentence under house arrest.

But the government rejected their appeals, and said Noriega would return to prison once he recovered from the brain tumor surgery.

Noriega was toppled in a December 1989 US military invasion.

After surrendering to US troops in January 1990, he was flown to the United States where he was convicted on drug trafficking and money laundering charges, and sentenced to prison.

In 2010 Noriega was sent to France, where he was convicted on money laundering charges.

The following year Noriega was extradited to Panama, where he was locked up for the 1985 murder of a political opponent, the 1989 murder of a military officer who attempted a coup against him, and for the massacre of soldiers rebelling against him.

Other cases were pending against him for the disappearance of people before he became dictator, back when he headed Panama's National Guard.

In 2015, Noriega had apologized "to anybody who felt offended, affected, prejudiced or humiliated by my actions."