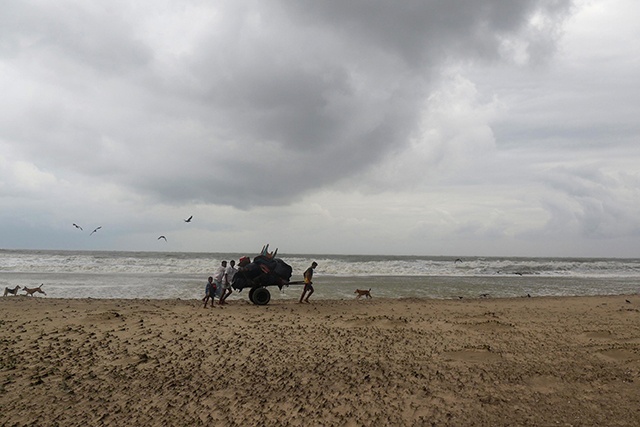 Bangladeshi villagers evacuate to cyclone shelters on the coast in Cox's Bazar district on May 30, 2017. Cyclone Mora hit Bangladesh on May 30, packing winds of up to 135 kilometres (84 miles) per hour, damaging thousands of homes as more than 300,000 people fled coastal villages.

(AFP) - The Bangladesh navy said Thursday it has rescued 23 fishermen from the Bay of Bengal and is searching for scores more missing since a cyclone hit two days ago.

Most were plucked from a sinking boat which had broken down, leaving them  stranded at sea when Cyclone Mora hit on Tuesday, killing seven people and destroying thousands of homes.

The navy said its ships were conducting an "extensive search" of the area after the storm left a trail of devastation along the coast.

They are also carrying food, emergency relief and two medical teams to Kutubdia and Saint Martin's, two coastal islands that were hit hard by the cyclone.

"At least 15 ships have been deployed to search for survivors in the Bay of Bengal after the storm," a senior Navy official said.

"They are still in the sea and have rescued 23 fishermen from the water."

A navy statement said the rescued fishermen had been given first aid and food.

A navy helicopter and a maritime patrol aircraft are also conducting aerial searches for survivors, it said.

As the cyclone advanced on Bangladesh, local authorities increased the maritime threat to its highest level and ordered all fishing vessels to remain at port.

"We heard some 60 fishermen were rescued by Bangladeshi and Indian navy ships. If they're our men, we think some 90 fishermen are still missing," he told AFP.

"They could be moored on a island or adrift at sea. In the past we have seen that most of the fishermen return to their fishing ports within a week or two. We hope this time they will also be back in good health."

Bangladesh suffers frequent cyclones and fishermen are often reported missing only to be found in their villages after the storm has subsided.

Ahmed said it was the first time the navy had conducted such an extensive search for missing fishermen after a cyclone.

The rescues brought to total number of people plucked from sea the since Tuesday to 56.

An Indian navy ship rescued 33 Bangladeshi survivors on Wednesday, including children and women.

It was not immediately clear how the 33 rescued came to be in the sea, although some reports said they may have been swept from the shore.