Trump pulls US out of global climate change accord 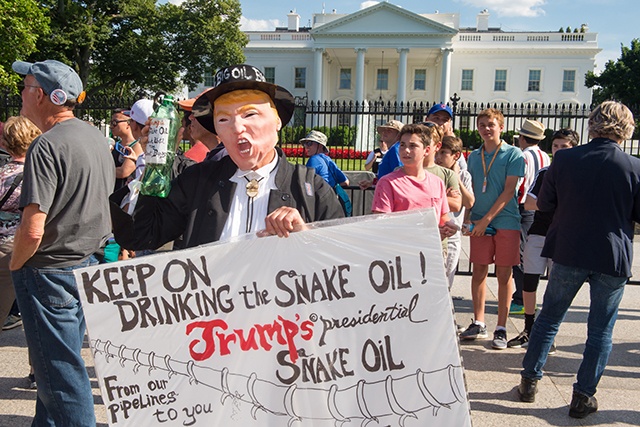 A protester holds up sign during a demonstration in front of the White House in Washington, DC on June 1, 2017, objecting to US President Donald Trump's decision to withdraw from the Paris Climate accord. President Donald Trump declared that the United States will withdraw from the 2015 Paris accord and try to negotiate a new global deal on climate change.
PAUL J. RICHARDS / AFP

(AFP) - President Donald Trump declared Thursday that the United States will withdraw from the 2015 Paris accord and try to negotiate a new global deal on climate change.

"I promised I would exit or renegotiate any deal which fails to serve America's interests," the president declared in an address in the White House Rose Garden watched anxiously by leaders around the world.

"I was elected to represent the citizens of Pittsburgh, not Paris," he said.

"As of today, the United States will cease all implementation of the non-binding Paris accord and the draconian financial and economic burdens the agreement imposes on our country," Trump said.

The US president complained that the accord signed under his predecessor President Barack Obama gives other countries an unfair advantage over US industry and destroys American jobs.

"I cannot, in good conscience, support a deal that punishes the United States -- the world's leader in environmental protection -- while imposing no meaningful obligations on the world's leading polluters," Trump said, before singling out China and India.

"This agreement is less about the climate and more about other countries gaining a financial advantage over the United States," he claimed.

"So we're getting out but we'll start to negotiate and we will see if we can make a deal that's fair. And if we can, that's great. And if we can't, that's fine," he said.

Trump's decision sparked an instant wave of indignation both at home and abroad, with Obama saying the move meant the US was "joining a handful of nations that reject the future."

Germany said the US was "harming" the entire planet, and European Commission President Jean-Claude Juncker called the decision "seriously wrong."

And after his city was cited, Pittsburgh Mayor Bill Peduto laid into Trump, tweeting: "As the Mayor of Pittsburgh, I can assure you that we will follow the guidelines of the Paris Agreement for our people, our economy & future."