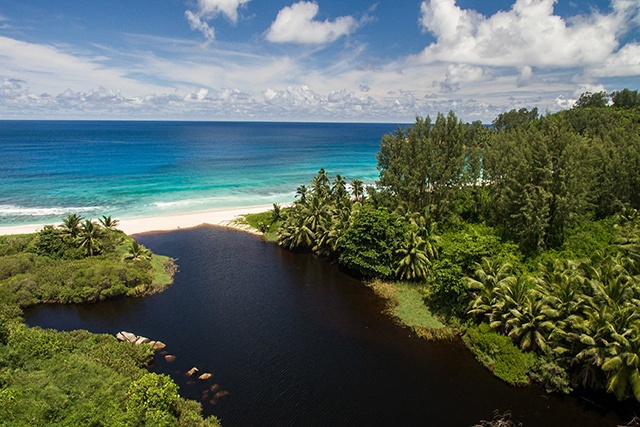 The area is home to the two species of endemic, Critically Endangered and nationally protected terrapins ‘Torti Soupap’ as well as being a potential foraging area for sheath tail bats. (Stan Adam)

(Seychelles News Agency) - A group of citizens who campaigned against the construction of the Grand Police Bay hotel said that they are proud of their achievement after the Seychelles’ Cabinet of Ministers decided to protect the area .

In a meeting of the Cabinet on Wednesday, ministers agreed that steps are taken to engage with the relevant owners so that the parcel of land number T575 is returned to the government and once that is done, declared a protected area.

A representative of the Grand Police Citizens Initiative -- the name of the campaign group, Tex Albert, told SNA that a lot had been done to stop the construction of the proposed Grand Police Bay hotel in Takamaka, a district in the south of Mahe, the main island.

“We did a massive campaign on social media to gather public opinion to strengthen our fight. We also organised a march and launched a petition, whereby we acquired 7,500 signatures, which were submitted to the head of state,” said Albert.

The group met with the Seychelles’ President Danny Faure last week in which the head of state gave his commitment that the documents will be tabled in the next Cabinet meeting on May 31.

A keen environment activist and sustainable development advocate, Albert commended the head of state for taking this bold step as well as his willingness to work with the people.

The hotel project was part of the 18 new tourism establishments excluded from the moratorium on the construction of large hotels. The announcement of the proposed construction at Grand Police had brought back public concerns on the project

“It is power to the people, especially residents of Takamaka, and we wouldn’t have done it without them. We feel very proud of our achievement and for the fact that the people have taken this stance,” said Albert.

Nanette Esparon who was also part of the campaign told SNA that although some people were scared to sign the petition, the group got many others who were supportive, leading to today’s outcome.

“I would like to congratulate all petitioners for supporting the cause to save Grand Police. However, this victory goes to the people of Takamaka, especially those I spoke too. They are very proud of their wetland as it has the highest number of turtles nesting sites,” Esparon told SNA.

The Member of the National Assembly (MNA) for Takamaka, Paul Ernesta, said, “Regardless of the people’s pressure, a decision had to be taken that will benefit the whole country.”

In a past interview with SNA, David Rowat, chair of the Marine Conservation Society Seychelles, who did a biodiversity assessment of the Grand Police, had said that the place is considered as an international key biodiversity area (KBA).

“It is in fact flanked by two other key diversity areas on the hills of the Collines du Sud which are currently being merged. The designation comes due to the fact that this is a freshwater wetland of which only 10 percent of the original ones currently survives,” Rowat had told SNA.

He had said that “As such, it is home to the two species of endemic, Critically Endangered and nationally protected terrapins ‘Torti Soupap’ as well as being a potential foraging area for sheath tail bats.”

Seychelles, a group of 115 islands in the western Indian Ocean, is home to 57 international outstanding biodiversity areas that need to be protected.

As this is a small victory, Albert said that the group will stay active and closely watch any development taking place at Grand Police.