Creeping invaders are target of plant control campaign in Seychelles 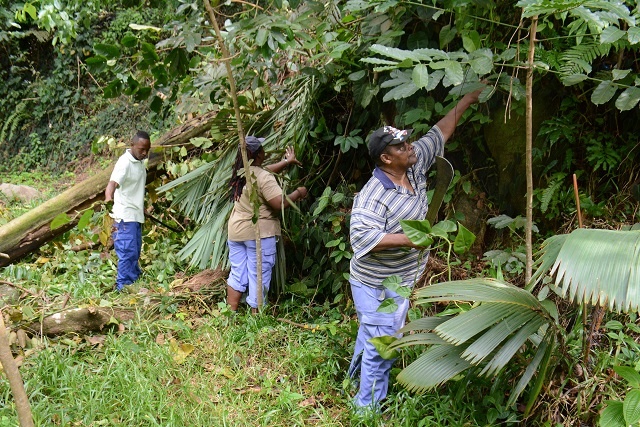 The authority’s chief executive, Flavien Joubert, told reporters that the campaign is targeting invasive creepers in areas where they have gone out of control and will focus on priority sites considered as protected areas and state land.

Joubert said the SNPA has worked with local experts to develop techniques and knowledge that could be shared with the public so they can assist as well. An amount of $18,300 (Seychelles rupees 250,000) has been allocated to start the project.

Alien invasive creepers or non-indigenous plant have been identified as a threat to the ecosystems and natural areas of Seychelles, a group of 115 islands in the Western Indian Ocean.

The creepers are common in all habitats of the island nation and the highland forests are mostly composed of alien species, but recently they have expanded in lowland areas, and some of these species have started to invade natural areas.

Although these alien plant species could be eliminated, Joubert said they can only control it for the time being.

“It is difficult to speak of elimination at this stage of time as it has propagated immensely around the islands. However, we can talk of control, capacity to rehabilitate areas that will not be susceptible to invasion,” Joubert said.

The chief executive said that “based on research, we have many tools and knowledge to start with the intervention and our knowledge will grow as soon as we start eradicating these species.”

Besides the creepers, there are other alien plants such as cinnamon, which has economic value, but Joubert said this should be dealt with in a different way.

Local biologist Elvina Henriette said that only some 33 alien plants seem to pose a problem in natural areas at present and 16 among them have been identified as priorities to be eradicated.

“Invasive alien species grow in areas where the ecosystem has been affected – especially by human activities, which include cutting down trees, crossing the borders with non-indigenous plants, and grass cutting, which are later disposed in other areas,” Henriette said.

She said the best way to eliminate an alien invasive species is to detect it as early as possible.

“There are combined ways to which we can eliminate these non-indigenous species. By that I am referring to uprooting the plant, using chemicals, and insects to eat the plant. However, all these methods have adverse effect if not done properly.”

The project was launched as part of activities organized for World Environment Day under the theme ‘Connecting People to Nature.’

The Principal Secretary for Energy and Climate Change, Wills Agricole, said, “this year’s theme invites us to think about how we are part of nature and how intimately we depend on it.” He added that: “It challenges us to find fun and exciting ways to experience and cherish this vital relationship.”

Other activities organized were clearing of the Vacoas Trail at Barbarons in collaboration with Avani Hotel as well as an environment march to sensitize the public on Praslin, the second most populated island.

Seychelles protecting even more of its waters, minister says on World Environment Day