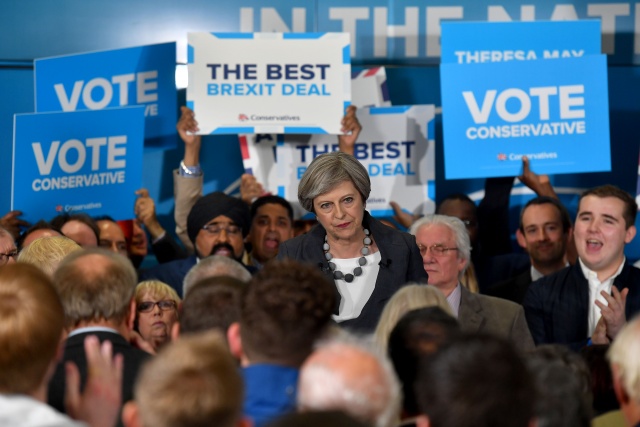 Britain's Prime Minister Theresa May addresses supporters at a campaign event in Slough in south-east England on June 6, 2017. Britain on Wednesday headed into the final day of campaigning for a general election darkened and dominated by jihadist attacks in two cities, leaving forecasters struggling to predict an outcome on polling day. (Paul FAITH / AFP)

(AFP) - Britain on Wednesday headed into the final day of campaigning for a general election darkened and dominated by jihadist attacks in two cities, leaving forecasters struggling to predict an outcome on polling day.

Police announced that a 30-year-old man had been arrested in east London following the attack in the capital on Saturday, which left seven people dead and 48 injured. France confirmed a second French national had died in the assault.

May aimed at the high-population East and West Midlands in her final dash, while Corbyn was to attend six rallies in England, Scotland and Wales, stretching from Glasgow to London, in a gruelling last-day marathon.

The prime minister had stunned Britain on April 18 when she announced a snap election, hoping to transform a massive opinion-poll lead into an equally huge majority in the House of Commons where she holds a slim 17-seat advantage in the 650-member legislature.

But the political ground began to shift under her feet, moving from EU membership -- May's strongest card -- to domestic policy and her own record on security, both of them favouring Corbyn.

Opinion polls -- hampered by a poor reputation for reliability -- predict a May win, but say it could be a small majority or even no overall majority at all.

On Tuesday, May fought to turn the message back to Brexit, saying she would be a "strong and stable" leader to fight Britain's corner in Brussels, where formal talks on the British departure from the European Union are due to start on June 19.

"Give me your backing to lead Britain, give me the authority to speak for Britain, strengthen my hand as I fight for Britain," May urged voters in Stoke-on-Trent -- the city that registered the highest vote for leaving the EU.

Despite being seen as an unlikely leader -- one who has faced off a rebellion by his own MPs -- Corbyn has gained momentum during the election campaign and regularly attracts big crowds to his rallies.

Labour gained a boost following the May 18 release of the Conservatives' manifesto, outlining elderly care costs which the tabloids dubbed the "dementia tax".

The pledge hit the party's core supporters and May was forced to backtrack on capping the costs, prompting further criticism that she was unreliable.

Corbyn then found a valuable seam in attacking May on security, an area where the Conservatives traditionally are far stronger than Labour in voters' minds.

A string of terror attacks have occurred since May became prime minister last July, and she was interior minister for six years before she rose to the top job.

Corbyn attacked her for slashing police numbers during her ministerial spell, and vowed to hire more police for neighbourhood patrols, a tactic that he said would provide a grassroots shield against jihadism.

The pro-May tabloid press fired a volley against Corbyn on Tuesday, led by The Sun whose headline -- "Jezza's Jihadi Comrades" referred to a speech he had made at a pro-Palestinian rally in Trafalgar Square in 2002.

- Security questions -
Questions are also being raised about the vaunted image of Britain's security services. Three terror attacks have taken place since March, leaving 34 dead and around 200 injured, and all involved assailants who were known to the authorities.

In the most recent attack, seven people were killed on Saturday when three men aboard a hired van ploughed into pedestrians on London Bridge and went on a stabbing spree before being shot by police.

Attacker Khuram Shazad Butt was known to British intelligence services, while an Italian prosecutor said Britain was notified that one of his accomplices, Youssef Zaghba, was a "possible suspect" back in March 2016.

Their rampage followed a similar attack next to the British parliament in March, in which assailant Khalid Masood was shot after killing five people.

In the most deadly attack, Salman Abedi killed 22 people at a Manchester concert venue on May 22 when he detonated a suicide bomb.

General » Be a reporter: Write and send your article » Subscribe for news alert
Tags: Britain, Vote