At UN ocean conference, US takes aim at illegal fishing 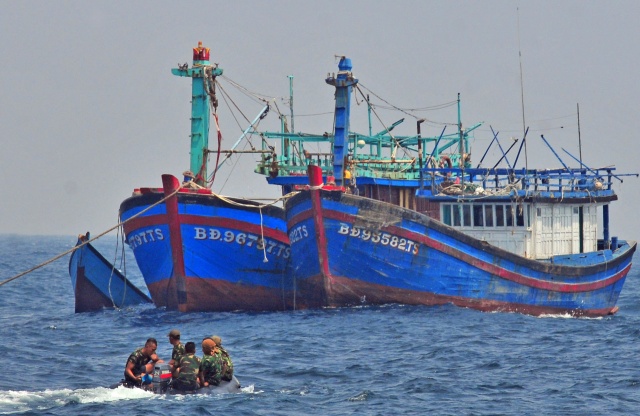 Indonesian navy personnel approach foreign fishing boats, seized for illegal fishing, before placing explosive used to sink the vessels at sea off Pontianak in West Kalimantan province, located in Borneo island, on August 18, 2015. The United States on Wednesday put a spotlight on global efforts to combat illegal fishing at the UN ocean conference, steering clear of the controversy over its pullout from the Paris climate deal. (AFP PHOTO / RUDI HARTONO)

(AFP) - The United States on Wednesday put a spotlight on global efforts to combat illegal fishing at the UN ocean conference, steering clear of the controversy over its pullout from the Paris climate deal.

President Donald Trump's envoy to the conference, David Balton, said the ocean and its resources are "under tremendous pressure from a variety of threats - including illegal fishing, marine pollution, and ocean acidification."

"Illegal, unreported, and unregulated -- or IUU -- fishing around the world is jeopardizing international food security and economic growth, and threatening marine ecosystems," said Balton, the US deputy assistant secretary for oceans and fisheries.

The UN's first ocean conference opened Monday under the shadow of the US exit from the 190-plus nation pact aimed at combating global warming.

The United States, the world's biggest carbon emitter after China, signed the agreement last year under the previous administration, but Trump has argued that the deal would harm the US economy.

UN Secretary General Antonio Guterres opened the conference with an appeal to countries to put aside national gain to save the oceans and avert a "global catastrophe."

"Pollution, overfishing and the effects of climate change are severely damaging the health of our oceans," he asserted, singling out plastic pollution as particularly harmful.

Guterres cited a recent study that showed plastic could outweigh fish in 2050, if nothing is done.

At the UN podium, Balton said the United States "has championed" an agreement on combating illegal fishing under the auspices of the UN Food and Agriculture Organization.

Illegal fishing is valued at tens of billions of dollars each year and is often linked to drug trafficking, organized crime, workers' exploitation and environmental degradation, he said.

The United States is set to join a "Call to Action" to be released on the final day of the conference on Friday, signed by governments that commit to taking steps to clean up the oceans.

The document refers to the "particular importance of the Paris agreement" and expresses alarm over impact of climate change on the oceans.

While it will endorse the "Call to Action", the United States will take the podium again on Friday to explain its position, US diplomats said.

General » Be a reporter: Write and send your article » Subscribe for news alert
Tags: environment, UN, politics, oceans, US, fishing