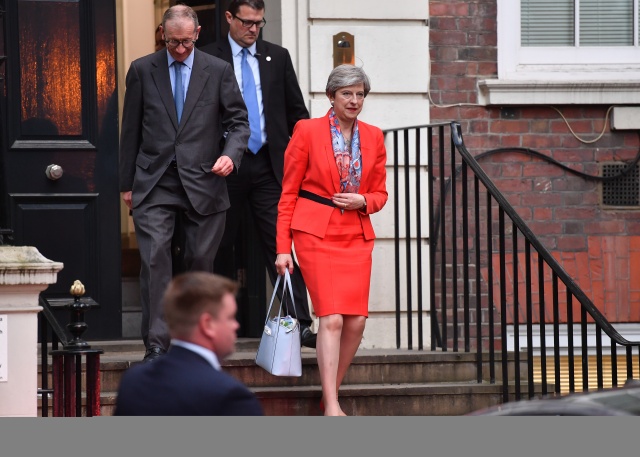 (AFP) - Major changes in Britain's political landscape seem on the cards after Thursday's general election, if exit polls and results from two-thirds of the 650 seats are confirmed.

British Prime Minister Theresa May -- who had called the snap election on April 18 in a bid to boost her grip on parliament -- will govern with a smaller majority or even lose her overall majority, according to these indicators.

Here are five takeaways from this still-emerging picture:

- Brexit gets even harder -

Britain's negotiations for leaving the European Union are likely to become "far more difficult," according to Tony Travers, a professor of the London School of Economics (LSE).

Formal talks are due to start on June 19, and the negotiation schedule will be tight and arduous.

Under the outgoing parliament, May had placed the country on course for a "hard" Brexit for leaving Europe's single market and ending free movement of people.

But this strategy is now in doubt under a weakened prime minister.

The Labour Party and Conservative moderates clamouring for a "soft" Brexit will now have more clout.

"It will be difficult to govern and it could mean another election later in the year," said Wyn Grant of the University of Warwick.

After she put the country through its third divisive vote in just over two years and then lost her bet with a widely criticised campaign, May's future seems badly clouded.

"It was a self-inflicted error, a self-inflicted wound and it was something that was likely borne out of a bit of taking the British public for granted," said Brian Klaas, a fellow in comparative economics at the London School of Economics (LSE).

The Labour leader was derided by May as a catastrophic choice for leading the country to Brexit, and the pro-conservative tabloid press vilified him as a Socialist blunderer who would be tossed out.

But with a confident campaign founded on radical policies, Corbyn confounded his critics and revived Labour's fortunes, and his future is secure.

"Jeremy Corbyn managed to mobilise his base. He managed to not only enthuse young people and people who hadn't voted before but actually get them to the polling station," said Tim Bale, a professor of politics at the Queen Mary University.

Prospects of a second referendum on Scottish independence are likely to recede.

Before the election, the Scottish National Party (SNP) threatened to hold a second independence vote because it did not want Scotland to leave the EU through Brexit.

But the SNP lost a string of seats in Westminster, including that of its former leader Alex Salmond and current deputy leader Angus Robertson, mainly to a regionally-resurgent Conservative Party.

"The scale of SNP losses is likely to damage the reputation of Nicola Sturgeon, party leader and Scottish first minister," striking "a heavy blow" to hopes of a second ballot, the Financial Times commented.

Sturgeon told the BBC she would "take time to reflect" on the results.

A major force in the 2015 elections and a driver of last year's Brexit referendum result, UKIP was weakened by the departure of its media-savvy leader Nigel Farage, by internal rivalries and by May's pitch to its voters on Brexit negotiations.

On Thursday, its share of the vote was set to fall from 11 percent to less than two percent and the party is unlikely to recover even the single seat it held in the outgoing parliament.