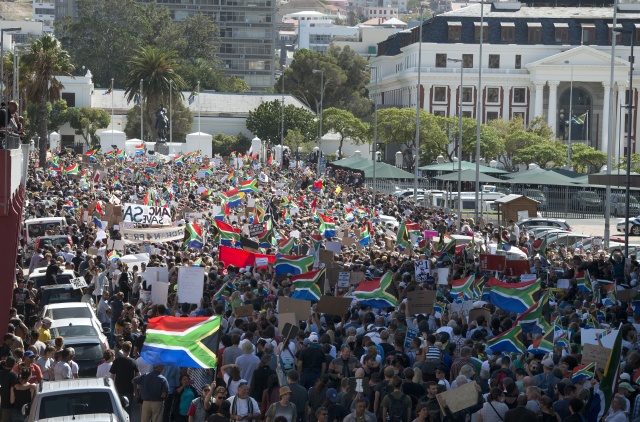 Thousands of people march through the city centre, to the South African Parliament, waving South African flags and banners, calling for the South African president to step down on April 7, 2017, in Cape Town. The protest comes after South African President Jacob Zuma dismissed widely respected South African Minister of finance, Pravin Gordhan in a cabinet reshuffle. The move by Zuma has caused the South African economy to be given a 'junk' rating by two of the international financial ratings agencies widely seen as a move to allow a controversial nuclear deal with Russia to go through, as well as allowing the Gupta family to buy a bank in the country, neither of which Gordhan would allow as Minister of Finance. A cut-out poster of Atul Gupta is visible. (RODGER BOSCH / AFP)

Africa's most advanced economy was knocked down from Baa2 to Baa3 -- one notch above junk status -- with a negative outlook, Moody's said in a statement.

The decision outraged the opposition and part of Zuma's own ruling African National Congress (ANC), with tens of thousands taking to the streets to demand the president's resignation.

Moody's had delayed its decision but finally announced the downgrade Friday citing "the weakening of South Africa's institutional framework" as well as worsening growth prospects and rising public debt, according to the agency's vice president Zuzana Brixiova.

The downgrade came after official statistics released Tuesday showed South Africa entering its first recession since 2009 after the economy unexpectedly contracted by 0.7 percent in the first quarter.

South Africa has had sluggish growth for years, with record unemployment of more than 27 percent.

"The urgent priority is reigniting confidence as well as reclaiming and maintaining the investment grade ratings," the Treasury department said in a statement, vowing to improve "investor and consumer confidence" through faster reforms.

David Maynier, a lawmaker with the main opposition Democratic Alliance party, described the announcement as "more bad news, in a string of bad news, and is a clear vote of no confidence in Finance Minister Malusi Gigaba and President Jacob Zuma."

The ANC is due to elect a new leader in December when Zuma, who took office in 2009, steps down.

The party -- which Nelson Mandela led to power in the 1994 post-apartheid elections -- is hoping that a proposed judicial inquiry into persistent graft allegations against Zuma will help salvage its credibility ahead of the 2019 national elections.