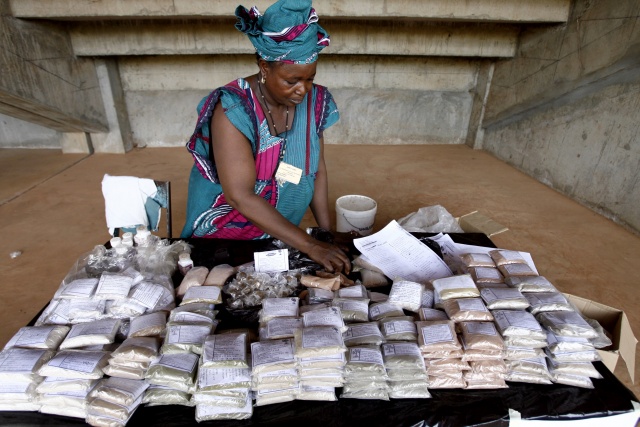 Artisan, or therapist, shows her products at Sissako's "Babemba Traore" stadium, 05 June 2007 as she attends the "People's market" as part of the forum to counter the G8 summit of rich states held in Germany at the same time. The five-day summit in Sikasso, a Malian town 370 kilometres (230 miles) south of the capital Bamako, will tackle debt, food security and immigration, as well as the creation of an alternative to the World Bank. (AFP PHOTO / GEORGES GOBET)

(AFP) - German Chancellor Angela Merkel will on Monday meet African leaders in Berlin on initiatives aiming to reduce the poverty and conflict driving a mass migrant influx to Europe.

The idea is to team up African nations willing to reform with private investors who would bring business and jobs to a continent where instability or graft often scare off foreign companies.

Merkel is hosting the initiative as part of Germany's presidency of the Group of 20 powerful economies, whose leaders meet in the northern port of Hamburg a month later.

"In Africa, economic development needs to keep pace with the high and accelerating population growth and promise a future for young people, which would also help to ease migratory pressures," said Merkel's spokeswoman Ulrike Demmer.

Germany, Europe's largest economy, has taken in more than one million asylum seekers since 2015 -- more than half from war-torn Syria, Iraq and Afghanistan, but also many thousands from Ethiopia, Nigeria and elsewhere in Africa.

Hundreds of thousands more have trekked through the Sahara into lawless Libya, hoping that traffickers there will take them in rickety boats across the Mediterranean Sea to Europe.

Those who can't pay the thousands of dollars demanded by the people smugglers are often held in squalid militia-controlled facilities, which German diplomats have likened to "concentration camps".

Merkel last year visited major transit countries Mali and Niger as well as Ethiopia, the seat of the African Union, and pledged 27 million euros ($30 million) in aid aiming to stop migrants heading for Europe in the first place.

"The well-being of Africa is in Germany's interest" Merkel said at the time.

Critics have dismissed the latest multilateral Africa initiative as a half-hearted effort without any aid commitment, but organisers say it could help boost prosperity and reduce the mass flight and brain drain, especially of young people.

Those countries will then receive technical support from the IMF, World Bank, other development institutions and their G20 partner country, which will also support the effort with its own companies.

Germany will team up with Ghana, Ivory Coast and Tunisia, while other G20 members will support efforts by Ethiopia, Morocco, Rwanda and Senegal.

More than 100 banks, companies and other potential investors are expected at the conference.

"This is not about hand-outs or just money or cheap money, but about the opportunity to attract investment, profits and jobs," said a German finance ministry official.

Non-government groups have criticised that the G20 club -- whose only member on the continent is South Africa -- is offering no financial commitments of its own, and that international trade often hurts African farmers and producers.

About 1,000 anti-globalisation protesters marched through Berlin on Saturday, waving signs that said "Africa is not for sale" and decrying the conference as a neocolonial grab for African resources at a time Europe wants to slam the door on its migrants.

The NGO One argued that it does little more than "reiterate existing plans" and remains "insufficient, short-sighted and one-dimensional".

With Africa's population expected to double by mid-century, it said that "the G20 is not yet ready to face the demographic explosion that Africa will experience in the years to come."