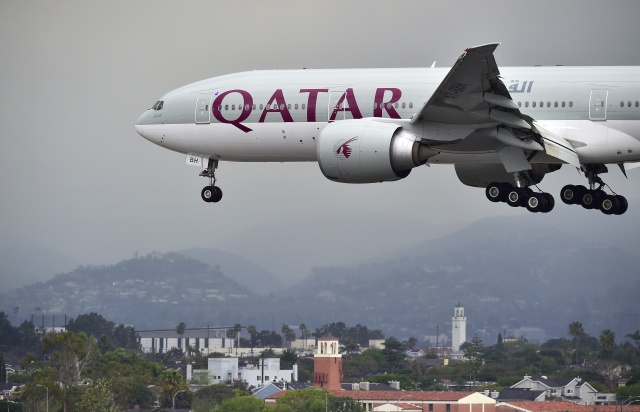 This file photo taken on March 21, 2017 shows a Qatar Airways aircraft, flight 739 from Doha, coming in for a landing at Los Angeles International Airport in Los Angeles, California. Qatar Airways has made Doha a global hub in just a few years, but barring it from Gulf states' airspace threatens its position as a major transcontinental carrier, experts say. (FREDERIC J. BROWN / AFP)

(AFP) - Qatar Airways has made Doha a global hub in just a few years, but barring it from Gulf states' airspace threatens its position as a major transcontinental carrier, experts say.

Along with its Gulf peers -- Dubai's Emirates Airlines and Abu Dhabi's Etihad -- Qatar's national carrier has captured a sizable portion of transit travel, capitalising on the Gulf's central geographic location.

But political differences between Qatar and neighbouring Saudi Arabia, the United Arab Emirates and Bahrain, as well as Egypt, exploded last week into a full-blown regional crisis, including severing air links.

The measures meant cancelling dozens of daily flights by Qatar Airways and carriers from those countries, and also mean Qatari aircraft have to make long diversions, mainly around Bahrain and the vast airspace of Saudi Arabia.

"The impact is already bad because it has driven up flight times and therefore costs. As the airspace tightens, the problem grows much worse," said aviation analyst Addison Schonland from US-based AirInsight.

"Operationally, this is a constraint for the airline that is almost certainly now seeing its profits cut deeply," he added.

Qatar is almost completely encircled by Bahraini airspace that covers a large part of Gulf waters, and its planes usually cross Saudi airspace on their way to the rest of the Middle East, Africa and South America.

Qatari planes are now instead using Iran's airspace to get to Europe and skirting the southeastern tip of the Arabian Peninsula to avoid Saudi territory.

The flight time for a Qatar Airways trip to Sao Paulo in Brazil, for example, has increased by around two hours, according to flight detecting websites.

Flights to North Africa are now travelling over Iran and Turkey towards the Mediterranean, instead of flying more directly over Saudi Arabia and Egypt.

However, flights to Europe appear largely unaffected as they continue to use the Iran route, with a just small diversion to avoid Bahraini airspace.

The Islamic republic has opened its airspace to around 100 more Qatari flights daily, increasing Iranian air traffic by 17 percent.

"For the future, Qatar flights' routes and fuel burn will be increased as a result of this," said aviation analyst Kyle Bailey.

"Future long-haul reservations will come down, because even with the high service and excellent amenities, who wants to sit for longer on an airplane?" he said.

About 90 percent of Qatar Airways traffic through Doha is transit, according to a report by CAPA Centre for Aviation.

Losing these "will no doubt be devastating to the carrier's financial bottom line, wiping out about 30 percent of revenue," he said.

Qatar Airways is also the largest foreign carrier operating in the UAE, and the fifth overall after the country's own airlines, according to the CAPA report.

Part of this transit traffic is likely to be scooped up by Qatar Airways' regional competitors Emirates and Etihad, experts say.

"No question about it. Especially Emirates because they have the A380 (superjumbo) capacity to catch the traffic without even a hiccup," said Schonland.

The two UAE carriers have wide global networks, and together with Qatar Airways have drawn the ire of European and US legacy carriers who accused them of benefiting from state subsidies to expand into their traditional markets.

But Emirates and Etihad, as well as other carriers from countries involved such as the UAE's flydubai and Air Arabia, will also lose out with the suspension of their Doha routes.

"There can be few winners" from the ban, according to the CAPA analysis.

Contrary to the argument that Emirates and Etihad might boost their numbers of transit passengers, CAPA argued that the ban affects the reputation of Gulf aviation in general.

"The nuances of the ban are too particular for the public to understand, but the broader shadow it creates spreads widely," it said.

"Amidst growing security concerns and the existing laptop ban, passengers are unlikely to dig in to the reason for this ban. Gulf aviation becomes less attractive for all," it added.

The United States and Britain banned laptop and tablet computers on flights from certain Middle Eastern and Turkish airports in March for security reasons.

On a positive note, Qatar Airways announced late Sunday a 21.7 percent rise in its profits to $540 million in the financial year that ended in March.