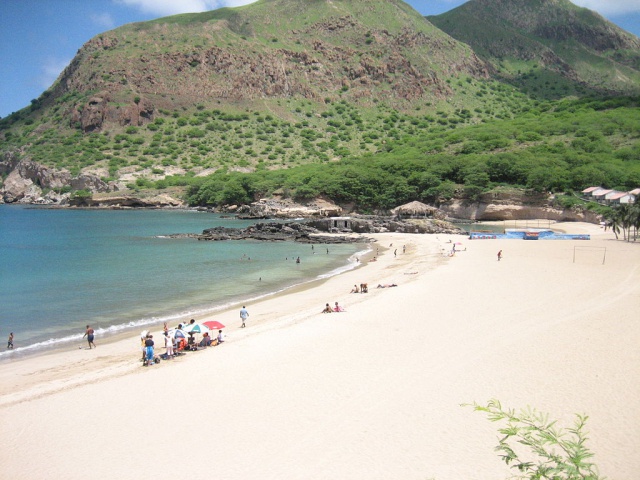 (Seychelles News Agency) - On the day of the arrival of Cabo Verde President Jorge Carlos Fonseca to Seychelles for a state visit, SNA presents an analysis by Wanjohi Kabukuru, of the incredible story of the island nation which has become a model for African development.

When the Tubaroes Azuis (Blue Sharks) made their debut in the Africa Cup of Nations in 2013 everyone underestimated them as the tourney’s ‘whipping boys’. But the Cabo Verdean national soccer team under the stewardship of coach Lucio Antunes went on to stun Africa’s known soccer giants becoming the favourites with the fans. The Tubaroes Azuis made it to the quarter finals where they were bundled out by four time African champions Ghana.

Before their appearance in the continental football fest many people in the mainland Africa did not know much of the Cabo Verde archipelago situated in the Atlantic Ocean some 575 kilometres off the coast of Senegal in West Africa.  More importantly was that the achievements of the Tubaroes Azuis were directly connected to the country’s governance in the last three decades.

It is now 10 years since the United Nations General Assembly (UNGA) adopted Resolution 59/209 which graduated Cabo Verde from a Least Developing Country into a Middle Income Country (MIC). The island nation with a population of close to 0.5million people has seen its GDP per capita in the last three decades rising from a paltry $175 to $4188. Studies by the African Development Bank (ADB) and the US Heritage Foundation term Cabo Verde a nation of 10 islands and five islets with little arable land and within the Sahara belt as a miraculous success story.

The story of Cabo Verde’s economic success began in 1975 when it secured its independence from Portugal. This was one year after its twin colony Guinea-Bissau had been granted its freedom.

The independence of these two countries was the triumph of the PAIGC or Partido Africano da independencia da Guine e Cabo Verde in Portuguese (African Party for the Independence of Guinea and Cabo Verde). Apparently PAIGC was well known in Africa thanks to the reputation of the Cabral brothers (Amilcar and Luis) who founded it in 1956.

In 1963 PAIGC launched an independence war in both Cape Verde and Guinea Bissau against Portugal. Amilcar was assassinated in 1973 and a year later Portugal granted independence to Guinea Bissau with Luis as President. In Cabo Verde Aristides Pereira who was the secretary general of PAIGC became President and Pedro Verona Rodrigues Pires who was one of the PAIGC military commanders during the struggle for independence took the premier’s position in 1975.

In much of Africa Amilcar was well admired for his thoughts and writings which inspired many in the continent. 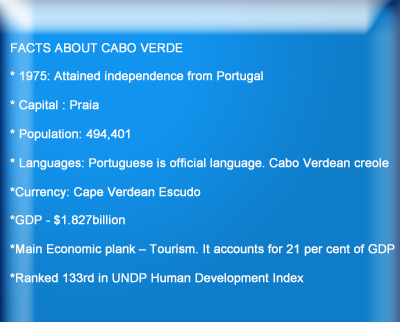 Both Guinea Bissau and Cabo Verde were on the verge of uniting however the plans were abandoned in November 1980 after a coup by Joao Bernardo Vieira in Guinea Bissau deposed President Cabral. Relations between the two nations with a common destiny and political party worsened with the coup as in January 1981 the African Party for the Independence of Cape Verde (PAICV) was born and Pereira retained his position as president.

The PAICV opened the archipelago’s democratic space to allow for multi-party democracy. In 1991 PAICV was defeated in the multi-party elections by the Movement for Democracy party led by Antonio Monteiro. In 2001 Pires bounced back into the mainstream politics when he won a hotly contested presidential election.

Even though it is during Pires’ presidency that Cabo Verde’s turn-around story can be traced, it has now emerged that it goes back in time from the day Pires was premier in the mid 70s. His gracious acceptance of defeat after 16 years as premier is cited as one of the key pillars of his ideals on leadership.

“Quem e pobre nao pode fazer uma politica de rico.” (A poor country cannot afford to adopt policies from the rich). It is now 39 years since President Pires uttered these words which marked the hallmark of his presidency. Under Pires Cabo Verde prospered and outperformed many countries in Africa even rivaling much of Europe.

In September 2011 Pires resisted all attempts from his party’s stalwarts to extend his presidency by changing the Cabo Verdean constitution after serving his two terms. He retired after having served his country right through the independence struggle and handed over to President Jorge Carlos Fonseca. One month later Pires was awarded the Mo Ibrahim’s Prize for Good Governance in Africa.

“The fact that Cabo Verde with few natural resources can become a middle income country is an example not just to the continent but to the world. President Pires embodies the type of leadership the prize is designed to recognize.” Mo Ibrahim said at the time recognizing Pires for putting the interests of Cabo Verdeans as his guiding principle. 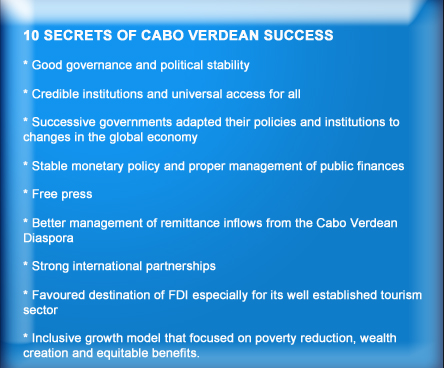 The citation recognizing Pires was even more revealing: “The prize committee has been greatly impressed by President Pedro Pires vision into transforming Cabo Verde into a model of democracy, stability and increased prosperity. Under his ten years as president the nation became only the second African country to graduate from the United Nations Least developed category and has won international recognition for its record on human rights and good governance.”

The citation read by Salim Ahmed Salim the chair of prize committee noted. “The result is that Cabo Verde is now seen as an African success story, economically, socially and politically. Throughout his long career President Pires has been dedicated to the service of his people including those in the Diaspora while retaining his humility and personal integrity.”

A year after Pires left office the African Development Bank (ADB) conducted a study on the archipelago which culminated into Cabo Verde: A success story.  “Universal access to primary and secondary schools has been achieved, a strong social safety net has been set up and the benefits of growth have been distributed through an inclusive approach to policy making and nation building.”

The 2012 ADB study notes “These achievements were made possible by prudent macroeconomic management including fiscal soundness and maintenance of a competitive exchange rate. Cabo Verde has gained international credibility for its macro-economic policies, a stable currency pegged to the Euro, good governance with low corruption rates, a simplified tax system and a reformed banking sector.”

ADB’s conclusions are shared by Dr. Carlos Lopes the Executive Director of the United Nations Economic Commission (UNECA). “Cape Verde is a real African success story.” Lopes writes in his Africa Cheetah Run blog. “In the space of 30 years from 1982 to 2012 per capita income has increased by a factor of 3.5 in real terms. This gives an idea of the formidable achievements of this small nation.”

It is this African model nation that Fonseca who is a law professor and former foreign affairs minister has inherited. Fonseca belongs to the MFD and his tenure is interesting to mainland Africa as the prime minister Jose Maria Neves belongs to PAICV. This is not peculiar in Cabo Verde as the rule of law and strong institutions with no record of coup d’états helps forestall leadership crises and bolsters good governance.

“Cabo Verde is a genuine success story with a functioning multi-party democracy a growing economy with falling levels of poverty” is how the European Union describes Cabo Verde.

“Cabo Verde is regarded as a safe haven for investment. These achievements were also made possible by an earnest and sustained focus on building strong institutions free of corruption.” ADB’s report says.

“From independence onwards successive governments have fostered pluralism and a universal sense of citizenship, a participatory political process and trust between the government and citizenry. The peaceful multi-party democracy has survived changes in leadership. It is a society based on laws that also respects human rights and civil liberties.”

‘I am a reformer’ – is African Development Bank presidential candidate, Cristina Duarte the woman for the top job?