Obesity 'epidemic' affects one in 10 worldwide 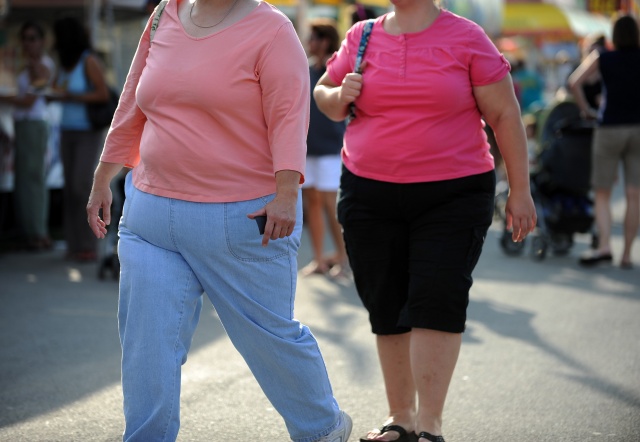 This file photo taken on August 19, 2009 shows two women walk at the 61st Montgomery County Agricultural Fair Gaithersburg, Maryland. A The number of obese people has more than doubled in 73 countries since 1980 and has continued to rise in other countries, leading to a large increase in related diseases, according to a wide-scale study published in the New England Journal of Medicine and presented at a conference in Stockholm on June 12, 2017. (Tim SLOAN / AFP)

(AFP) - More than one in 10 people worldwide are now obese and 2.2 billion are believed to be overweight, fueling a global health crisis that claims millions of lives every year, according to a major new international study released on Monday.

Obesity numbers have more than doubled in 73 countries and surged elsewhere around the world since the launch in 1980 of the study published in the New England Journal of Medicine.

Conducted in 195 countries over a 35-year period, the research presented at a conference in Stockholm on Monday is billed as the most comprehensive carried out to date on the subject of obesity.

At the conclusion of the study in 2015, 107.7 million children and 603.7 million adults worldwide were deemed to be obese, triggering what its authors described as "a growing and disturbing global public health crisis."

Even though the obesity rate in children remained lower than among adults, it had grown at a faster rate during the study period -- a finding experts described as especially "worrisome."

"Excess body weight is one of the most challenging public health problems of our time, affecting nearly one in every three people," said Dr. Ashkan Afshin, the paper's lead author and an assistant professor of global health at the Institute for Health Metrics and Evaluation (IHME) at the University of Washington in Seattle.

"Over the past decade, numerous interventions have been evaluated, but very little evidence exists about their long-term effectiveness," he added, announcing a new 10-year partnership with the Food and Agriculture Organization to evaluate global progress in controlling excess weight.

A total of 2.2 billion people -- 30 percent of the world population -- were believed to be either obese or overweight by 2015.

The World Health Organization had estimated the number of overweight people at 1.9 billion in 2014, including more than 600 million who were obese.

Excess weight is linked to sharply increased rates of cardiovascular disease, diabetes and some types of cancer.

Four million deaths in 2015 were linked to having a Body Mass Index (BMI) of over 24.5, indicating a person is overweight, or of 30 or more, indicating obesity. BMI is calculated by dividing a person's weight in kilograms by their height in centimeters squared.

Of those deaths, more than 40 percent involved people deemed non-obese -- indicating that being overweight, even without being obese, is leading to millions of premature deaths.

More than two-thirds of deaths linked to a raised BMI were attributed to cardiovascular diseases, marking a sharp increase since 1990.

The lowest rates of adult obesity were in Bangladesh and Vietnam, both at one percent.

China and India had the highest number of obese children -- respectively 15.3 and 14.4 million.

The United States and China, meanwhile, had the greatest number of obese adults -- respectively 79.4 and 57.3 million.

In an editorial accompanying the study, Dr. Edward Gregg and Dr. Jonathan Shaw, both epidemiologists at the US Centers for Disease Control and Prevention, said the most worrisome finding was the approximate tripling of obesity in youth and young adults of middle-income countries -- namely China, Brazil, and Indonesia.

"An early onset of obesity is likely to translate into a high cumulative incidence of type 2 diabetes, hypertension, and chronic kidney disease," they warned.

The study was based on the latest data provided by the Global Burden of Disease (GBD) study, which tracks the impact of more than 300 types of pathology and injury in 133 countries.

Its chief goal was to understand, on a global scale, what is driving "the current global epidemic of disease" related to high body weight, the authors said.

The research was unveiled Monday at the annual EAT Stockholm Food Forum, which brings together scientists, business leaders and policy makers to address ways to transform the global food system to help solve the challenges of climate, sustainable development and health.