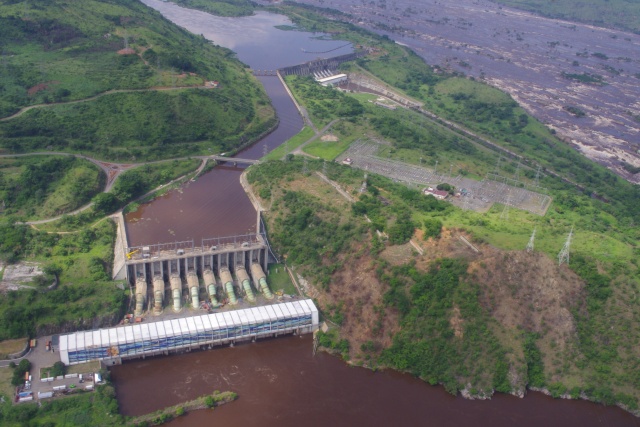 Aerial view taken on December 16, 2013 in Inga shows Inga 1 (rear) and Inga 2 (front) power plants on the Congo river. The Democratic Republic of Congo and South Africa vowed on October 16, 2015 to step up work on a massive new hydroelectric dam on the Congo River that could provide power to the entire continent. The Inga 3 Basse Chute project near Matadi would divert Congo River waters into a 12-kilometre (7.5-mile) channel and then pass them through a 100-metre-high (330-foot) hydropower dam in the Bundi Valley before releasing the water back into the river. The intake would be above the existing Inga 1 and Inga 2 dams, and the outflow downstream from both. (AFP PHOTO/MARC JOURDIER)

(AFP) - The Democratic Republic of Congo said Tuesday it has asked Chinese and Spanish bidders of a colossal dam project to join forces and submit a joint bid.

The request will further delay the huge project, known as Inga 3, that has been planned for around 30 years.

The government had said it would award the contract by the end of last year with an aim to launch construction this year.

In the running for the deal are two consortiums, one led by the Chinese Three Gorges Corporation and another grouped under Spanish construction company ACS.

The Congolese government agency handling the project ADPI asked the two consortiums to present a single, "optimised" offer, but did not set a deadline for starting to produce electricity.

In September last year the agency said it wanted electricity production to start in 2021.

The Inga 3 project is expected to complement two ageing power stations built between 1972 and 1982 on the Inga falls of the Congo River 260 kilometres (162 miles) downstream from the capital Kinshasa.

The dam is expected to generate 4,800 megawatts of power, equivalent to the output of three third-generation nuclear reactors, in a country where less than 10 percent of the population has access to electricity.

South Africa has signed an option to buy 2,500 megawatts of power, with much of the rest planned for mining groups in Katanga in the south east which suffers from chronic electricity shortages.

The World Bank last July froze planned disbursements of a $73.1 million grant aimed at funding technical assistance, saying the country had taken the project in a different strategic direction than had been agreed.

Since then, political uncertainty over the position of Congolese President Joseph Kabila who stayed in power after his mandate ended last year, along with no prospect for elections in the near-term have weighed heavily on the business climate of the country.