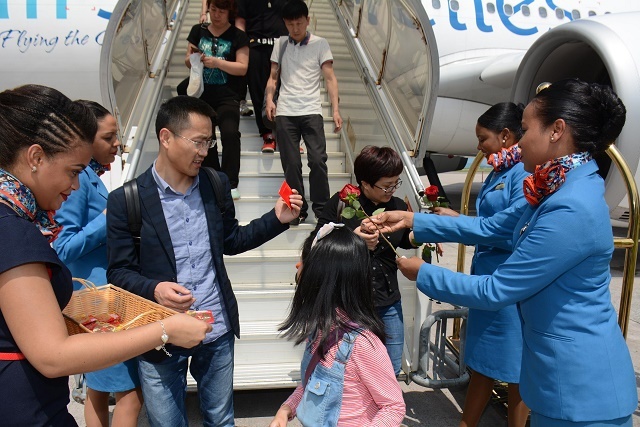 The CEO accredited this drop to economic setbacks the Chinese are facing and to the lack of direct flights from Seychelles to China (Patrick Joubert, Seychelles News Agency)

(Seychelles News Agency) - The Seychelles Tourism Board (STB) is looking to collaborate with a Chinese company to organise a chartered flight in partnership with Air Seychelles as a means of boosting the number of Chinese visitors to the island nation, said a top official.

The chief executive of STB, Sherin Francis, told SNA that her team has noticed a slight drop in the number of visitors from China. The CEO accredited this drop to economic setbacks the Chinese are facing and to the lack of direct flights from Seychelles to China – the world’s most populous country.

In February this year, the flight by the Seychelles national carrier -- Air Seychelles to Beijing stopped as the one-year charter contract came to an end.

“The charterer decided not to extend beyond February 2017. Air Seychelles is open to further China services subject to a third party stepping forward wishing to commit to operations,” said the airline’s spokesperson.

Air Seychelles started a weekly scheduled charter flight service between the Chinese city of Beijing and the island nation’s main island of Mahé in late January last year in accordance with the bilateral Air Services Agreement signed between the two countries.

Air Seychelles’ spokesperson told SNA that to provide visitors from Beijing with more travelling options to the island nation, “Air Seychelles has recently expanded its codeshare agreement with Etihad Airways which will come into effect from 14 June for both sale and travel.”

From January to date the National Bureau of Statistics (NBS) of Seychelles has recorded a little over 5,800 Chinese visitors that arrived into the 115-island archipelago in the western Indian Ocean, as compared to the 6,900 registered in the same period last year. At the moment China is in seventh place in terms of visitor arrival numbers.

“We have re-launched our strategy for China as this is a performance that we were predicting,” said Francis.

The tourism board officially launched their campaign to reposition the island nation in China last month. STB through the campaign dubbed ‘The call of the islands…the last Eden on earth’, aims at working closely with local partners so as to deliver an attractive array of products and services.

STB also most recently took part in a roadshow across China to promote the Seychelles -- its beaches, flora and fauna, cuisine and culture -- among over 150 tour operators and travel agents.

The roadshow was organised in Shanghai, Beijing, Guangzhou, and Chengdu. In line with the set strategy, Seychelles’ tourism board seeks to attract experienced and high-end Chinese travellers from these first-tier cities as well as Shenzhen.

Francis affirmed that despite the drop, “China remains one of Seychelles’ priority markets as it is one that can help us in the months when we do not see a lot of European visitors [the leading market].”

Seychelles relies heavily on tourism which is the top pillar of the country’s economy. In 2016 a record number of 303,177 visitors set foot in the country.