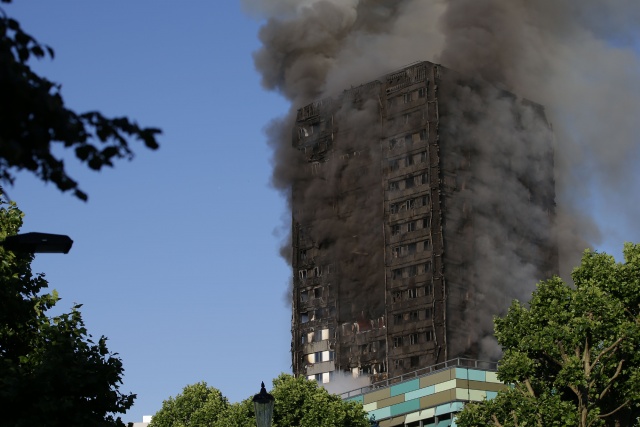 Smoke billows from Grenfell Tower as firefighters attempt to control a huge blaze on June 14, 2017 in west London. The massive fire ripped through the 27-storey apartment block in west London in the early hours of Wednesday, trapping residents inside as 200 firefighters battled the blaze. Police and fire services attempted to evacuate the concrete block and said "a number of people are being treated for a range of injuries", including at least two for smoke inhalation.
(Daniel LEAL-OLIVAS / AFP)

(AFP) - A massive fire ripped through a 27-storey apartment block in west London before dawn on Wednesday, causing fatalities and injuring dozens more after residents were left trapped inside.

London Fire Brigade chief Dany Cotton said there had been "a number of fatalities" in what she called an "unprecedented" blaze.

The ambulance service said 50 people had been hospitalised.

"There have been a number of fatalities. I cannot confirm the number at this time due to the size and complexity of this building," she told reporters at the scene.

"This is an unprecedented incident. In my 29 years of being a firefighter, I have never ever seen anything of this scale," she said.

Eyewitnesses said they had seen some people fall or jump from the stricken building and at least one resident waving a piece of white cloth from one of the upper floors as flames ravaged the tower.

The alarm was raised at around 1:00am (0000 GMT) and just one hour later the entire block was in flames.

Residents said the fire was on the exterior of the building, which had been covered in cladding in a major refurbishment completed last year.

Eight hours after emergency services were called, flames could still be seen inside the charred building as a thick plume of black smoke marred the west London skyline.

Large pieces of debris could be seen falling from Grenfell Tower, a 1970s council block in the working-class north Kensington area -- a short distance from chic Notting Hill.

Witnesses said they heard screaming from the upper floors as the flames raced up the tower in the night.

"They were trapped. They couldn't come downstairs, especially from the top floor ... people have been burned," a witness identified as Daniel told BBC Radio London.

Hanan Wahabi, 39, told AFP she escaped with her husband and son, 16, and daughter, 8, but feared for her brother and his family who live on the 21st floor.

"Last time I saw him they were waving out of the window, his wife and children," she said, sitting outside the Rugby Portobello community centre.

Wahabi's husband Salah Chebiouni, 45, said he was in the kitchen when "I saw fire outside my window".

"Fire on the ninth floor -- that's wrong. The fire was on the outside, not the inside. From the windows not the door," he said.

Eddie, 55, who lives on the 16th floor, said he ran out of his house with a wet towel wrapped around his head as smoke engulfed the flat.

"You couldn't see anything. I just ran down the stairs... Loads of people haven't got out of the building," he said.

Another witness named as Jody Martin told the BBC that he battled his way his way to the second floor only to encounter choking smoke.

"I watched one person falling out, I watched another woman holding her baby out the window... hearing screams, I was yelling everyone to get down and they were saying 'We can't leave our apartments, the smoke is too bad on the corridors'," he said.

Frantic families at the scene attempted to call their loved ones, fearing they could be stuck inside, and were being directed by police to a nearby restaurant where some of the injured were being treated.

The fire brigade said 40 fire engines and 200 firefighters had been called to the blaze at Grenfell Tower, which has 120 flats.

"Fire is from second to top floor of 27 storey building," the fire service said on Twitter.

Firefighters said earlier they had managed to evacuate residents up to the 11th floor.

Police cleared nearby buildings because of fears about falling debris and shut down a section of the A40 highway -- a normally busy thoroughfare into London.

A London Underground line passing the area near Latimer Road station was also shut down.

The apartment block was built in 1974, but had recently undergone a major refurbishment, including a new heating and hot water system.

Local residents had warned a year ago about a potential fire risk caused by rubbish being allowed to accumulate during improvement works.

"This matter is of particular concern as there is only one entry and exit to Grenfell Tower during the improvement works," read a blog post by the Grenfell Action Group.

"The potential for a fire to break out in the communal area on the walkway does not bear thinking about as residents would be trapped in the building with no way out," it said.