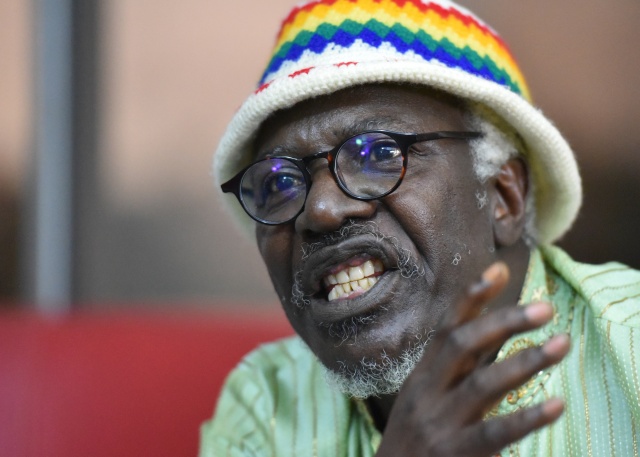 Ivory Coast reggae singer Alpha Blondy speaks during an interview with AFP in Abidjan on June 14, 2017. Blondy on June 14, 2017, has called for a general amnesty and the release of all prisoners held under the post-election crisis in Ivory Coast from 2010 to 2011. (Sia KAMBOU / AFP)

(AFP) - Reggae elder statesman Alpha Blondy called in an interview for a general amnesty and release of all prisoners held in his home country Ivory Coast since the political violence of 2010 and 2011.

"Reconciliation in Ivory Coast can only be done through a general amnesty," the multi-million album selling star said. "An amnesty would be a courageous political act."

Split from 2002 to 2011 between the rebel held north and government controlled south, Ivory Coast has recovered to become one of the fastest growing economies in the world, but the legacy of the conflict still divides the country.

"People are traumatised in Ivory Coast, even politicians. The trauma is the fear of war that they have already seen," said Blondy, wearing a red, yellow and green Rasta beanie.

"Today it's this fear that makes it difficult to be politically courageous", the singer said, insisting that the question of national reconciliation has not really been addressed.

As the man who put Ivory Coast on the reggae map by proving the genre was not exclusive to Jamaica, Blondy is not only one of the world's most popular reggae artists, but also one of its most outspoken.

The star goes as far as calling for the release of former president Laurent Gbagbo, currently on trial at the international criminal court in The Hague, because, he argues, "it's like the country is on trial".

More than 3,000 people were killed after Gbagbo refused to accept defeat in 2010 to the current president, Alassane Ouattara.

Gbagbo has pleaded not guilty to accusations of orchestrating “unspeakable violence”, including ordering murder and gang-rape after his election loss.

Blondy believes Ble Goude should also be released, and with a defiance that could shock and anger victims of the conflict, Blondy describes the ICC trial as "shameful" and says "it proves how mediocre politicians in Ivory Coast are".

He also argues for the release of Simone Gbagbo, Ivory Coast's former first lady, who is currently serving a 20-year prison sentence in Ivory Coast for her role in the post-2010 election violence.

Blondy, whose hits include Jerusalem and Apartheid Is Nazism, has often spoken about the problems in Ivory Coast and has a wide following in both the country and around the world.

Although President Ouattara was re-elected two years ago, he faces mounting woes that are threatening his authority, and the question of succession is also reviving rivalries, a development that has been condemned by Blondy.

These are "silly quarrels", according to Blondy, who insists the country should be pulling together.

"It's indecent to engage in quarrels of succession when the person one wants to succeed is alive," he said.

Born to a Muslim mother and Christian father, the singer was named a UN peace messenger for Ivory Coast in 2005 and has regularly lobbied politicians to work together.

In May, a deadly revolt by soldiers over pay raised fears of a resurgence of the kind of violence seen during Ivory Coast's 10-year civil war.

The mutiny came to an end after the government agreed to pay each soldier substantial sums of money.

"If we must pay those who have made war, how much are we going to pay to those who died?" Blondy said.

"Stop it! It is about time we act together."