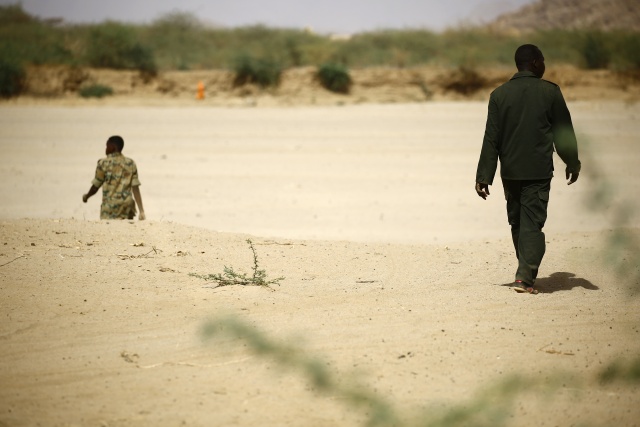 Members of the Sudanese border security patrol the Sudan-Eritrea border for smugglers and illegal migrants near the eastern Sudanese border town of Kassala on May 2, 2017. (ASHRAF SHAZLY / AFP)

(AFP) - The African Union on Saturday urged Djibouti and Eritrea to show "restraint" as tensions intensified over a disputed border territory after the withdrawal of Qatari peacekeepers from a buffer zone.

Djibouti has accused Eritrea of occupying the territory in the Doumeira region following the departure of the Qatari troops, threatening the revival of a longstanding and at times violent dispute.

In 2008, Eritrea sent its troops into the area, north of the city of Djibouti and strategically located at the entry to the Red Sea, leading to clashes between the two sides.

Tensions had also flared between the two countries over the zone in 1996 and 1999.

AU commission chairperson Moussa Faki Mahamat called for "calm, restraint" and said the union would send a "fact-finding mission to the Djibouti-Eritrea border".

The Qatari pullout comes as the Gulf emirate is locked in a bitter dispute with Saudi Arabia and its allies over alleged ties to Islamist extremists, a charge it denies.

Both Djibouti and Eritrea have good relations with Saudi Arabia and the United Arab Emirates, and have taken their side in the Gulf row.

Djibouti is a strategic ally for global powers, hosting French and US military bases with a Chinese one under construction, while Eritrea is widely regarded as a pariah state.

Diplomatic sources said Saturday that the UN Security Council would meet Monday afternoon in New York to discuss the crisis, in a closed-door meeting requested by Ethiopia.

Djibouti Foreign Minister Mahmoud Ali Youssouf on Thursday accused Eritrea of "moving its forces" into the Doumeira region, taking advantage of the departure of Qatari troops that had been stationed there since 2010 as a buffer between the two nations' armies.

"Djibouti is a peaceful country and we have prioritised diplomatic solutions, but if Eritrea insists in seeking military solutions, Djibouti is ready for that," Youssouf told a press conference broadcast on local television.

In a statement issued Saturday, Eritrea did not address the allegations directly, saying it would not respond to "news -- factual and speculative -- churned out in the last few days".

"The government of Eritrea will make its views known when it obtains full information of the entire episode," said the statement issued by the information ministry in Asmara.

The AU said it was "ready to assist Djibouti and Eritrea to normalise their relations and promote good neighbourliness within the framework of relevant AU instruments."