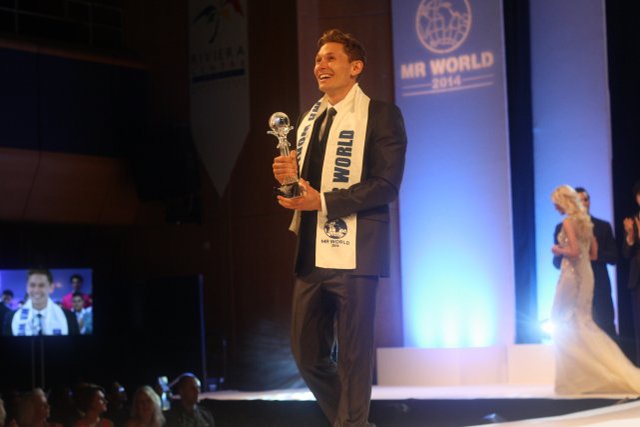 (Seychelles News Agency) - A few months remain till the crowning of Miss World 2014, but already her companion that will share the spotlight for the coming year is already known.

Danish heart-throb Nicklas Pedersen was crowned Mr World 2014 in a glitzy ceremony held at the Riviera Centre in Torbay, Devon, yesterday. The 23-year-old carpenter, who was born on the outskirts of the Danish capital, Copenhagen, beat 45 other finalists from all over the world after gruelling contests such as windsurfing, sailing, mountain-biking and marathon-running.

The event, which is sponsored and run by the Miss World Organization, is judged in the challenge phases by experts in each discipline and the interviews were judged by the outgoing Mr World, Francisco Escobar, two previous holders of the Miss World title, a musical director, stage and choreographical director and a stylist. The final was hosted by current Miss World, Megan Young and former Mr World Canada, Frankie Cena.

From the 46 finalists, the winners of the five challenges were announced as follows: Moldova’s Valeria Gutu (winner of the Extreme Challenge), Curacao’s Zuemerik Clementino Richard Veeris (winner of the Talent segment), Denmark’s Nicklas Pedersen (winner of the Sports Challenge), the Netherlands’ Demian Overduijn (winner of the Multimedia Award) and Nigeria’s  Emmanuel Ifeanyi Ikubese, who won the Style and Fashion Award.

All five were automatically sent through to the Top Ten, to which the judges later added Ukranian contestant Bogdan Iusypchuk, England’s Jordan Williams, Mexico’s Jose Pablo Minor and Prateek Jain from India.

After being crowned the winner, Pedersen will face a year of using his talents and physical beauty for a good cause, espousing the “Beauty with a Purpose” motto of the Miss World organisation. The Dane will also receive the grand prize of $50,000.

Colombian Francisco Escobar, who was crowned Mr World in November 2012, had some sage words of advice for his successor.

“I will advise him to enjoy the journey, because you will only get one chance. The journey is beautiful, it’s going to change his life forever, and it’s more than just his year or two years, it is forever.”

“I am happy with what I did and I am happy to see someone else given the chance. I wish them the best of luck. Enjoy the experience, travel, give it your best… It’s a moment, you’ve got to just be happy do what you like and accept as many of the opportunities the job gives you.”

Over the past 18 months, Francisco travelled the world to carry out his duties, appearing on television shows, modelling, and attending high profile events such as the International Emmy Awards. But for Francisco, it wasn’t just all about the glitz and glamour of the title – he realized he had an important opportunity to make a difference in the world.

Enrolled as an Ambassador for ‘Beauty with a Purpose’, the official charity of the Miss World Organization, Francisco has contributed to a variety of projects for the charity. He also recently set up a sports foundation in his home town of Cali in Colombia to reach out to vulnerable youths and keep them away from crime and drugs.

Francisco achieved all of this while completing his college degree and keeping in top form as a competitive pole vault athlete.

“The charity element of my role has been beautiful, I really love that. My mum taught me from a young age about the virtues of charity,” said Francisco. “When I was a kid she helped out with elderly people and children, in lots of foundations, and working for people around the world has been amazing. I think that made the travelling better because I was travelling with a purpose. I was visiting different cities, in different countries, being in places I never thought I would go, but I had a mission in each one, which made it special, and made me feel like I had real value.”