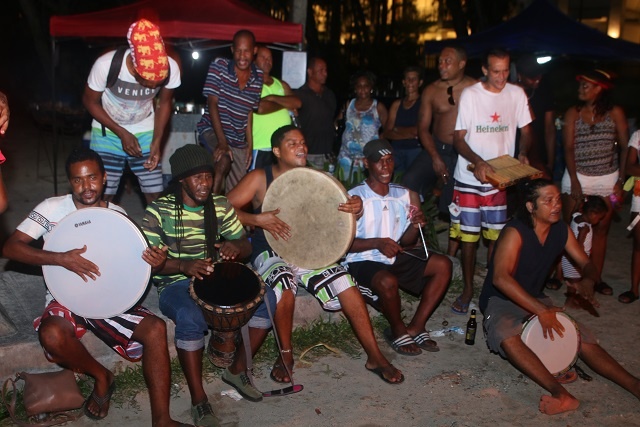 Every Wednesday during the Bazaar Labrin, a festive market that starts in the afternoon and runs until late evening (Joe Laurence, Seychelles News Agency)

(Seychelles News Agency) - Visitors who want to experience some of Seychelles’ traditional music have the chance to do so on Wednesdays at Beau Vallon on the northern side of Mahe, the main island, during the performance of a local youth group.

Every Wednesday during the Bazaar Labrin, a festive market that starts in the afternoon and runs until late evening, the musicians known as Group Vwazen roll out their drums and accompanying instruments to entertain spectators.

Their specialty is the moutia, one of Seychelles’ traditional types of music performed around a campfire. Originally, the music was played only on drums made out of goatskin which the musician ‘tuned’ by the heat of fire. Nowadays the goatskin drums have been greatly replaced by synthetic drums.

“Some people do not like the plastic synthetic drums. They say that this is not a real moutia drum. They appreciate the traditional one better saying that the goat skin gives a much more authentic sound,” said Kilindo the leader of the band.

The music starts with the slow beating of one drum and then goes faster and more rhythmic as the tempo increases.

The formation of Group Vwazen

Group Vwazen was greatly influenced by ‘Fek Arive,’ another locally well-known moutia band which started their musical performance on the very same beach.

“When ‘Fek Arive’ stopped performing, one of its former members took us under his wings. He gave us some of the skills we have today,” said Chanel Kilindo, leader of ‘Group Vwazen’.

To learn more about the moutia, the group did their own researches and approached the elderly of the society.

“They explained that back in the days, moutia was a form of entertainment as there was no electricity, television or radio. According to the information that they gave us, they only used three drums,” said Kilindo.

A lot of practice went into the art and before long the six-member group decided to come up with a name. With all of them coming from the same neighborhood in Beau Vallon, they chose the name ‘Group Vwazen.’ (Vwazen’ means neighbour.)

Other than their weekly performances at the bazaar, the group entertains at special events and sometimes holds gigs in hotels.

Tradition with a modern touch

With a musical background of different genres, the group wanted to promote their culture and tradition but with a twist.

“Among us youth we decided that we were going to modernise moutia and that is the reason why we introduced djembe (a rope-tuned skin-covered goblet drum), triangle and cowbell,” said Kilindo.

He said that introducing these instruments tend to make the sound of their music much more appealing however the moutia rhythm remains the same.

What can be done to promote moutia?

By modernising the moutia, the group hopes to create awareness about this local traditional music. Kilindo however, feels that there is more that needs to be done to promote it.

“There is a lack of traditional music being played and sometimes tourists approach us and ask where can they go to see other traditional performances? We don't have anything to say to them as we do not have anywhere to send them,” said the band leader.

As a group of youth who would like to preserve the culture and traditions of the 115-island archipelago in the western Indian Ocean, they feel that there more effort should be put into its promotion. They suggested that more activities and workshop orientated around moutia be conducted.

“During the workshop they can show how moutia is performed and others might be inspired by that. Some people who are interested in performing traditional music do not know where to go  to practice this form of art and this might become a way for those interested to meet each other and ultimately form a group,” said Kilindo.