Global pact on environmental rights to be presented to UN 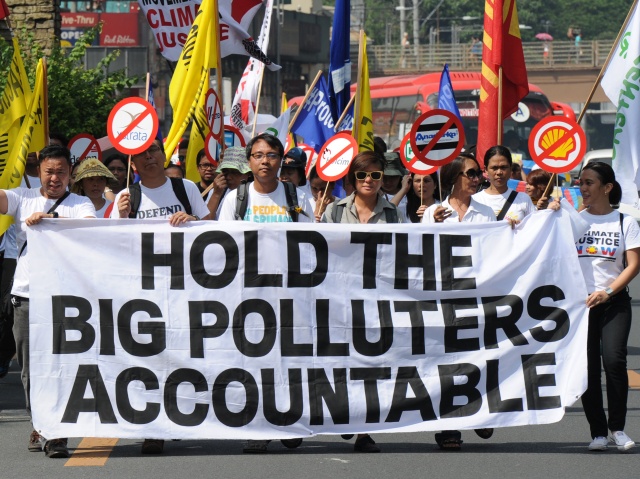 Philippine environmental activists march during a protest at the Human Rights Commission office in Manila on September 22, 2015. The activists are calling for an investigation into the top 50 investor-owned fossil fuel companies over climate change impact on people and their livelihoods. Around 800 political figures, lawyers and experts from around the world will launch a draft "Global Environment Pact" on June 23 in Paris to become an international treaty, affirming key environmental principles, such as the polluter-payer principles. (GEOFFROY VAN DER HASSELT / AFP)

(AFP) - Hollywood star turned activist Arnold Schwarzenegger joined politicians and legal experts in Paris Saturday to launch a campaign for a global pact to protect the human right to a clean, healthy environment.

French President Emmanuel Macron promised to present the pact which its supporters want to see become an international treaty to the United Nations in September.

"With the planetary plan, we need to move on to a new stage after the Paris accord," said Macron, referring to the landmark agreement signed in December 2015 by 196 nations to take steps to reduce greenhouse gases and combat global warming.

The end goal of the new pact is a legal treaty under which states can be brought to justice for flouting the rights of a group or individual.

"We already have two international (human rights) pacts... The idea is to create a third, for a third generation of rights -- environmental rights," said former French prime minister Laurent Fabius, who also presided over the Paris COP 21 conference on climate change.

Seeking to underline the urgency of the need to act, Fabius said it was time for "less talk, more action", borrowing the turn of phrase from ex-California governor-turned climate campaigner Schwarzenegger, who joined the gathering, as did former UN chief Ban Ki-moon.

Other participants at the meeting at the Sorbonne university included high court judges from several countries.

The initiative comes just weeks after President Donald Trump announced that he would pull the United States out of the Paris Agreement on curbing dangerous global warming.

But Schwarzenegger in his campaigning to fight climate change said it must not be a partisan political issue.

"It is absolutely imperative that we not make it a political issue," he said after meeting Macron on Friday.

The new pact will eventually be put to the United Nations for adoption, and impose legally-binding obligations on signatory states, its drafters say.

The earlier covenants -- one for social, economic and cultural rights, the other for civil and political rights -- were adopted by the UN in 1966.

Fabius says the new text will outline rights and duties, provide for reparations to be made in case of a breach, and introduce the "polluter pays" principle, holding them legally responsible or compelling them to adopt green laws.

That would be in marked contrast to earlier declarations such as that made following the 1992 UN Conference on Environment and Development in Rio which was not legally binding.

Qatar to charge those behind invasive airport searches of women