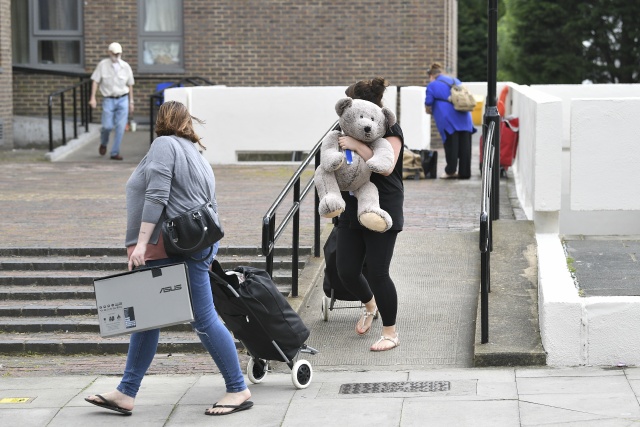 Residents carry possessions as they leave Dorney Tower residential block on the Chalcots Estate in north London on June 25, 2017. Thousands of residents from 650 London flats were evacuated on June 24 due to fire safety fears in the wake of the Grenfell Tower tragedy, but dozens refused to leave their homes, according to local officials. Four of the five Chalcots Estate towers in Camden, north London, were deemed unsafe after they were found to use cladding similar to that on Grenfell, widely blamed for the rapid spread of the massive blaze last week that is presumed to have killed 79 people. (Justin TALLIS / AFP)

(AFP) - The fallout from London's devastating tower block blaze continued on Sunday with the government announcing 60 high-rises have failed safety tests, as an insurance body said they had warned officials of the fire risks.

The massive operation to test tower blocks follows the Grenfell Tower inferno earlier this month that is presumed to have killed 79 people after it spread at shocking speed.

Suspicion has fallen on the cladding installed on the outside of Grenfell and urgent checks have found such material used on 60 other residential buildings has failed fire tests.

"All landlords and fire and rescue services for these local authorities have been alerted to the results and we are in touch with all of them to support and monitor follow-up action," said local government minister Sajid Javid.

The new figure is a significant jump from the 34 high-rise buildings in England deemed unsafe by the government on Saturday.

While many people have been able to stay in their homes despite the fire risk, thousands of residents from 650 flats in north London were evacuated on Saturday.

An inspection showed four of the five Chalcots Estate towers in Camden were at risk over cladding, fire doors, gas pipes and insulation, prompting a chaotic evacuation with temporary accommodation offered in a local leisure centre and hotels.

Despite the safety fears, around 200 residents have refused to leave their homes, some of whom suffer from agoraphobia, according to local authority leader Georgia Gould.

"I'm going myself back to the blocks to knock on doors and have those conversations," she told BBC television of her efforts to convince residents to leave.

Gould refused to be drawn on whether there was a deadline to evacuate residents, saying: "The last thing I want to do is force people out of their homes."

It is up to each local authority to decide whether to evacuate residents from blocks which have failed fire tests, a spokesman for the communities and local government department told AFP.

As tests continue to avoid a repeat of the horror which broke out at the Grenfell Tower on June 14, the Association of British Insurers said it had warned of the risks posed by cladding in feedback to a government policy document.

"In our response to the government's housing white paper in May this year we drew attention to the fact that external cladding made from combustible material can cause fire to spread," ABI spokesman Malcolm Tarling told AFP by email.

The same government department which is now spearheading the safety checks ran a consultation between February and May, requesting feedback on its "white paper" policy document on overhauling the housing sector.

A spokeswoman for the department for communities and local government was not immediately able to comment on the ABI's feedback, which has not yet been published.

As the charred skeleton of the 24-storey Grenfell block looms over the west of the city, London MP David Lammy said trust has hit "rock bottom" as many in the local community believe more than 79 people were killed.

"Survivors cannot believe that the death toll has not risen. Speaking to people on the ground, there is huge suspicion of a cover-up," he said.

Police have warned that the number of victims could rise still, with detective Fiona McCormack on Friday saying a full forensic search of Grenfell Tower could take until the end of the year.

All "complete bodies" have been removed from the wreckage but there remains "a terrible reality that we may not find or identify everyone who died due to the intense heat," she said.

General » Be a reporter: Write and send your article » Subscribe for news alert
Tags: Britain, fire

Prince Charles to stand in for Queen at UK parliament opening