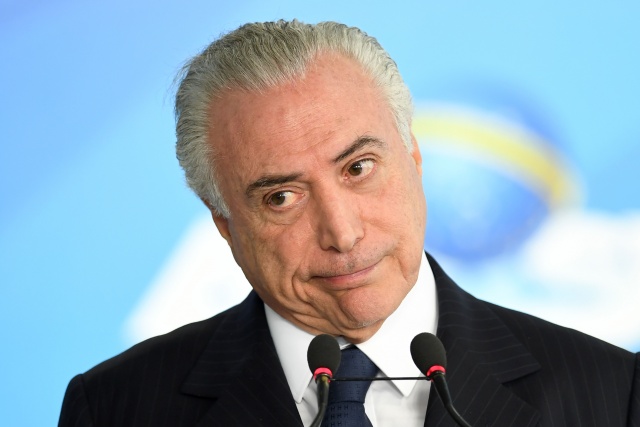 Brazilian President Michel Temer gestures during the signing ceremony of the decree that fees differential prices for payment in cash and with credit card at the Planalto Palace in Brasilia, on June 26, 2017. Temer faces his own crisis with the prosecutor general expected to request formal corruption charges against the president Monday or Tuesday. (EVARISTO SA / AFP)

The first sitting president of Brazil to face criminal charges, Temer is accused of accepting bribes from a giant meatpacking company. He is also under investigation for obstruction of justice and belonging to a criminal organization.

But the center-right president has made clear he does not intend to let the scandal -- part of a huge corruption probe engulfing scores of politicians -- drive him from office.

Leading newspapers Folha de S. Paulo and Globo quoted aides saying that Temer's strategy would be to attack Janot's evidence against him as flimsy and politically motivated.

"For personal reasons, the prosecutor general is putting the country at risk and mounting a political crusade," Folha quoted a presidential aide as saying.

"The president is moving to the phase of total war to save his mandate," the newspaper's columnist Bernardo Mello Franco wrote.

Temer himself has not commented since Janot filed the charge with the Supreme Court late Monday. However, hours earlier he'd declared: "Nothing will destroy us -- not me and not our ministers."

For Temer to go on trial, the scandal-plagued lower house of Congress must first approve Janot's charge by a two-thirds majority. Temer would then be suspended for six months for the trial.

Temer's aides say they are confident he has sufficient support in Congress, where many lawmakers are themselves reeling from bribery and other corruption probes, to get the charges thrown out.

The Eurasia Group risk consultancy said there was still a 70 percent chance of Temer lasting to the end of his term through 2018.

Temer's latest approval ratings are just seven percent, lower than his deeply unpopular leftist predecessor Dilma Rousseff, whom he replaced last year after she was impeached by his congressional allies for breaking budgetary rules.

When he took over Temer promised to restore political stability and steer Brazil out of its deepest recession in history with market reforms.

Yet the political capital he needs for those austerity measures, including the hugely unpopular proposal to cut back generous pensions and to free up labor laws, is rapidly slipping away.

Currently, the lower house of Congress is lukewarm about bringing him down. There is no clear candidate to take his place on an interim basis before scheduled elections in October 2018, and many of the major figures in Congress are themselves battling corruption allegations.

However, Janot appears set to deny Temer an opportunity to clear his name quickly, since the bribery charge is likely to be followed separately by others -- each one going to the lower house of Congress for a vote.

That could slowly bleed away the resolve of Temer's allies as they calculate the cost of being associated with him ahead of the elections.

The bribery charge is linked to the arrest of a close former presidential aide caught carrying a suitcase stuffed with cash that prosecutors say was part of payments from JBS meatpacking executives to Temer.

Temer acted "in violation of his duties to the state and to society," Janot said, citing "abundant" proof of bribe taking.

Temer says that his former aide was acting independently and that there is nothing to link him to the approximately 500,000 reais ($150,000) in the suitcase. The aide is in detention facing corruption charges, but has so far refused to cooperate with prosecutors.

Meanwhile, the obstruction of justice investigation accuses Temer of approving a plan with Joesley Batista, owner of JBS parent company J&F, to pay hush money to a politician jailed for corruption.

Batista secretly recorded Temer allegedly discussing the hush money and gave the recording to prosecutors in a plea bargain to secure leniency in his own corruption case.