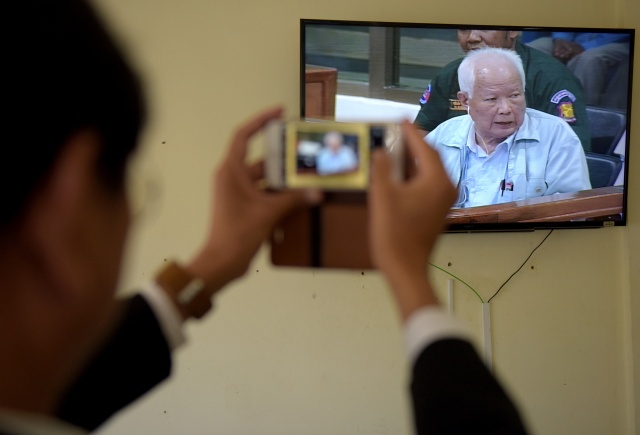 Dim Sovannarom, chief of the public affairs section of the Extraordinary Chambers in the Courts of Cambodia (ECCC), takes a picture former Khmer Rouge leader Khieu Samphan (back R) as his image is shown on a live video feed during closing statements of his trial at the ECCC in Phnom Penh on June 23, 2017. "Brother Number Two" Nuon Chea, now 90, and ex-head of state Khieu Samphan, 85, were sentenced to life in jail in 2014 for crimes against humanity from a regime responsible for the deaths of up to two million Cambodians from 1975-1979, and are currently undergoing a second trial for the genocide of ethnic Vietnamese and Muslim minorities, forced marriage and rape. (TANG CHHIN SOTHY / AFP)

One of the top surviving leaders of Cambodia's ruthless Khmer Rouge regime on Friday denied genocide charges and rejected the label of "murderer" in forceful closing remarks at a lengthy UN-backed trial.

The Khmer Rouge's former head of state, 85-year-old Khieu Samphan, spoke angrily to the Phnom Penh chamber trying him and another senior leader, 90-year-old Nuon Chea, for the regime's killing of ethnic Vietnamese and Muslim minorities, forced marriage and rape.

The men are the two most senior living members of the radical Maoist group that seized control of Cambodia in 1975 and carried out some of the worst atrocities of the 20th century.

Up to two million people are believed to have been killed by the time the Khmer Rouge was overthrown in 1979.

The pair were handed life sentences in 2014 after convictions over the forced evacuation of around two million Cambodians from Phnom Penh into rural labour camps and murders at one execution site.

But Khieu Samphan, who was one of the Khmer Rouge's few public faces as its head of state, claims he was not part of the killing machine that exterminated nearly a quarter of Cambodia's population from 1975-1979.

On Friday Khieu Samphan denied responsibility for the mass murders and other abuses against Cham Muslims and ethnic Vietnamese, which were described in chilling detail by more than 100 witnesses throughout the three-year trial.

"I didn't know about these issues," he said, adding that the "idea of Cambodian genocide" was invented by Vietnam.

At one point he made eye contact with witnesses who had described graphic accounts of Khmer Rouge cadres committing cannibalism, mass rape and holding killing competitions of the minority groups.

"I know that they really suffered. I also heard when they spoke to me sometimes referring to me as a murderer....But the term murderer, I categorically reject it," he said.

Nuon Chea, known as "Brother Number Two," declined to deliver a closing statement and watched the proceedings from a court holding cell due to his frail health.

His lawyer said Nuon Chea believed he was part of a "show trial".

The judge has not said when the verdict will be delivered.

The hybrid court, which uses a mix of Cambodian and international law, was created with the backing of the UN in 2006 to try senior Khmer Rouge leaders.

The number of allegations against Nuon Chea and Khieu Samphan was so vast the court split their trials into a series of smaller hearings in 2011, fearful the pair might die before a verdict could be delivered.

Only three people have been convicted by the court as several key Khmer Rouge leaders have died without facing justice, including "Brother Number One" Pol Pot, who passed away in 1998.

In February the tribunal dismissed a case against a mid-level Khmer Rouge official charged with crimes against humanity, saying she was not high-ranking enough to fall under the court's jurisdiction.