Under US pressure, UN agrees on deep cuts to peacekeeping 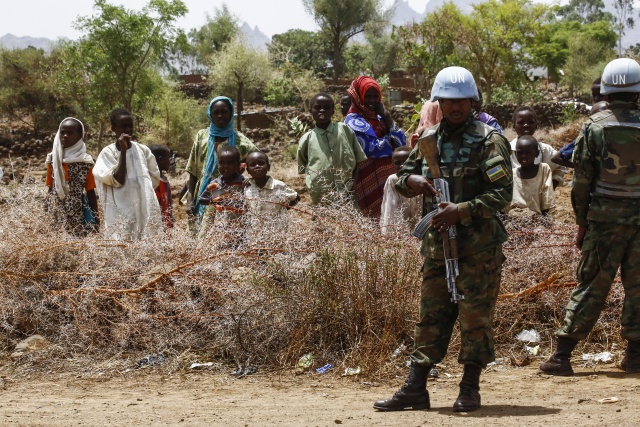 Rwandan peacekeepers part of the UN-African Union mission in Darfur (UNAMID) stand guard in the war-torn town of Golo in the thickly forested mountainous area of Jebel Marra in central Darfur on June 19, 2017. The town was a former rebel bastion which was recently captured by Sudanese government forces. The United States' top envoy in Sudan visited Golo on June 19, 2017 on the second day of his four-day trip to Darfur to assess security in the war-torn region as the UN prepares to downsize its 17,000-strong peacekeeping force. His visit also comes just weeks before President Donald Trump's administration decides whether to permanently lift a two-decades old US trade embargo on Sudan. (ASHRAF SHAZLY / AFP)

(AFP) - A deal on cutting nearly $600 million from the UN peacekeeping budget was reached Wednesday following weeks of negotiations over US demands for sharp cost reductions, UN diplomats said.

Under the deal reached by a General Assembly budget committee, the United Nations will spend $7.3 billion on peacekeeping in the coming year, down from the current $7.87 billion -- roughly a seven percent cut -- according to diplomats familiar with the negotiations.

The United States, the biggest financial contributor to peacekeeping, had sought a nearly $1 billion cut to the bill and the European Union had also pushed for savings to bring costs down to $7.3 billion.

US Ambassador Nikki Haley claimed victory in a statement, saying "just five months into our time here, we've already been able to cut over half a billion dollars from the UN peacekeeping budget and we're only getting started."

Hardest hit by the cuts will be the UN missions in Sudan's troubled region of Darfur and in the Democratic Republic of Congo, the two costliest operations with budgets that run over $1 billion.

A Security Council diplomat who spoke on condition of anonymity said however there will be "cuts across the board" in the 13 peacekeeping missions as a result of US pressure.

French Ambassador Francois Delattre said the deal will allow UN missions to "fully implement their mandate while being more efficient."

"The savings proposed in this budget have been carefully targeted," said Delattre.

The deal falls short of the request from UN Secretary-General Antonio Guterres, who had asked for $7.97 billion for the annual budget which runs from July 1 to June 30 of next year.

It also is less than what African countries had proposed: they wanted $7.7 billion for the UN missions.

The deal is expected to be approved by the UN General Assembly on Friday.

The Security Council is expected to vote as early as Thursday on significant cuts to the 17,000-strong joint African Union-UN mission in Darfur known as UNAMID.

Britain on Wednesday circulated a draft resolution that provides for a two-stage drawdown over the next 12 months, in line with the recommendations of a joint AU-UN report released last month.

The measure would cut UNAMID force levels to reach 8,735 troops and 2,500 police by June 2018, a 44 percent cut in military personnel and nearly 30 percent in police, according to the draft text obtained by AFP.

The drawdown could be reviewed if the Sudanese government fails to ensure protection in those areas from where the peacekeepers will withdraw.

Under the proposed measure, Guterres will report to the council after six months on whether "conditions on the ground remain conducive to further reductions."

The draft resolution welcomes a "reduction in military confrontations between government forces and rebel groups," but rights groups maintain that the conflict in Darfur is far from over.

Darfur has been engulfed in conflict since 2003, when ethnic minority insurgents mounted a rebellion against President Omar al-Bashir, complaining that his Arab-dominated government was marginalizing the region.

The United Nations has shut down its mission in Ivory Coast and is planning to pull its peacekeepers out of Haiti in the coming months.

France late Wednesday circulated a draft resolution on renewing the UN mission in Mali, known as MINUSMA, but no cuts are planned.

The mission would continue to operate with 13,289 troops and 1,920 police, according to the draft resolution seen by AFP.

A vote on renewing the Mali mission could take place on Thursday.