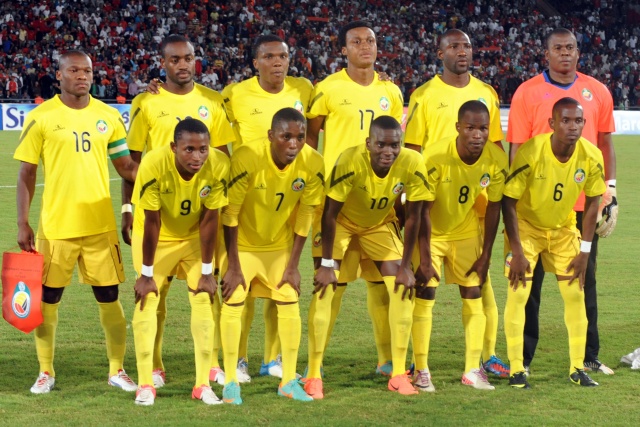 (File) Mozambique national team players pose for a group picture before their African Cup of Nation's qualifying match against Morocco in Marrakesh on October 13, 2012. It took a defender to end a 318-minute COSAFA Cup goal drought in Phokeng as Teca nodded Mozambique in front en route to a 2-1 victory over Seychelles Wednesday. (AFP PHOTO / FADEL SENNA)

(AFP) - It took a defender to end a 318-minute COSAFA Cup goal drought in Phokeng as Teca nodded Mozambique in front en route to a 2-1 victory over Seychelles Wednesday.

After Malawi, Mauritius, Angola and Tanzania failed to score in drawn Group A matches Tuesday, Zimbabwe and Madagascar drew 0-0 Wednesday in the first match of a Group B double-header.

But after failing to convert several good first-half chances, the Mozambican "Mambas" (Snakes) finally gave the crowd at the southern Africa championship some excitement.

Seychelles levelled on 63 minutes when Mozambique goalkeeper Victor Guambe let a low cross slip from his grasp and Rody Melanie slammed the loose ball into the net.

Mozambique punished slack marking to regain the lead 20 minutes from time as unmarked Joao Simango headed a corner into the net from point-blank range.

Victory lifted Mozambique to three points and kept alive hopes of topping the table and qualifying for a quarter-final against Swaziland.

Defeat eliminated the Seychelles with one round left as they are four points behind co-leaders Zimbabwe and Madagascar.

Zimbabwe play the Seychelles and Madagascar meet Mozambique Friday in matches to be staged simultaneously with the table-toppers securing a last-eight place.

Shocking finishing deprived Mozambican Nelson Divrassone of what could have been the goal of the tournament during the opening half.

Having started a run from inside his half and survived numerous challenges when moving into the box, he struck a shot that finished well off target.

Earlier, Milton Gulube squandered another good chance for the Mozambicans, blazing over from close range with only Dingwall to beat.

Zimbabwe had the better chances and a couple of genuine penalty appeals rejected in the stalemate with Madagascar, whose unbeaten run in all competitions stretched to seven matches.

The selfishness of Blessing Majarira prevented Zimbabwe taking the lead midway through the opening half.

He opted to shoot and struck the side-netting when a pass across the goalmouth would have found an unmarked team-mate.

Tanzania (plus two) lead Angola (plus one) on goal difference going into the final Group A fixtures in Phokeng and nearby Moruleng Thursday.

The Tanzanians face Mauritius and the Angolans meet Malawi with the group winners setting up a quarter-finals date with defending champions South Africa.

Africa » Be a reporter: Write and send your article » Subscribe for news alert
Tags: Fbl, COSAFA