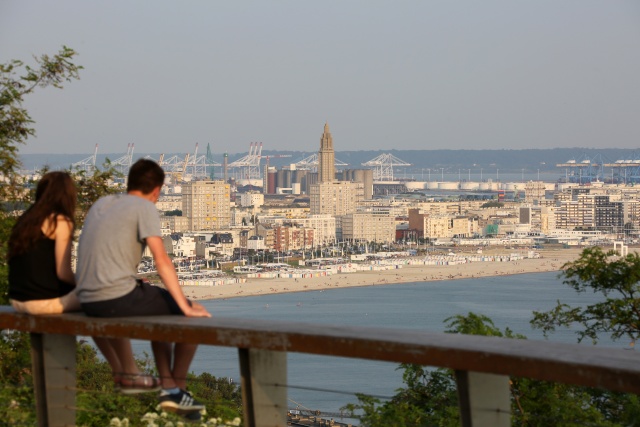 People look at a view of the seaside and the city center, with its Saint Joseph's landmark Church (C), in the northwestern French city of Le Havre on June 20, 2017. The city center, rebuilt by French architect Auguste Perret rebuilt after World War II, was granted by the UNESCO with the status of world heritage site in 2005. (LUDOVIC MARIN / AFP)

(AFP) - The Old City of Hebron in the Israeli-occupied West Bank and a rare collection of futuristic buildings in Eritrea are among sites hoping to gain protected status from UNESCO when it meets in Poland from Sunday.

The meeting of the World Heritage Committee of the UN's scientific and cultural body in Krakow will also examine concerns about high-rise buildings that threaten the historic centre of Vienna.

Seven natural sites, 26 cultural sites and one mixed site could be added to the list of more than 1,000 places which have protected status during the July 2-12 meeting.

Inclusion in the coveted list is often a source of national pride and can increase tourist numbers but it can also trigger rows and diplomatic friction.

Israel has already protested at the inclusion among the hopefuls of the Old City of Hebron deep in the West Bank, home to the imposing Tomb of the Patriarchs, the resting place of the Biblical figures Jacob, Isaac and Abraham and one of the most important religious sites to Muslims and Jews alike.

UNESCO enraged Israel in May when its executive board ratified a resolution that identified Israel as "the occupying power" in Jerusalem and called on it to rescind any move changing the city's "character and status."

The Israeli foreign ministry said that adding the Hebron site to the World Heritage list would "ignore the sensitivity of and Jewish connection to the city of Hebron" and would "further the organisation's politicisation".

The top UNESCO official for World Heritage, Mechtild Roessler, said she hoped "there will not be a controversy" over the Hebron site.

"I hope it will be a debate about substance. This committee is not about politics," she said in a briefing before the meeting.

The collection of buildings in the Eritrean capital Asmara includes cinemas, petrol stations, banks and shops that are a legacy of the colonisation of the northeast African nation by Italy, which stretched from the end of the 19th century until World War II.

Eritrea's entry describes the buildings as bearing "the unique pastel colours and rounded edges that marked the rationalist and futurist styles popular in Fascist Italy."

Roessler said she was "proud" that Asmara would be up for consideration when the inclusion of new sites are discussed on July 7-9.

"We are happy that entrants come from other parts of the world," she said, stressing that UNESCO was keen to change the perception of the Asmara site as purely colonial.

"We have worked hard to find another approach," Roessler said.

The historic centre of Vienna is a well-established UNESCO site but plans to build a 66-metre (216-foot) tower on the edge of the area could see it added to the World Heritage List in Danger.

The tower, which has already been reduced from its original planned height of 73 metres, is part of a project to build a hotel, conference venue and an indoor skating rink.

UNESCO helped to block a previous construction plan in Vienna in 2000. "I thought they had learned their lesson. I was wrong," Roessler said.

The experts will also debate whether the Kathmandu Valley, devastated by a massive earthquake in 2015, should be added to the list of endangered sites.

Nepalese authorities are opposed to such a listing, fearing it could discourage tourists.

A UNESCO spokesman confirmed that although it is not officially listed for discussion, the Selous Game Reserve in Tanzania would be debated.

Tanzania's President John Magufuli said Tuesday he planned to speed up the building of a hydroelectric dam in Selous, one of Africa's largest game reserves, which was added to the List of World Heritage in Danger in 2014.