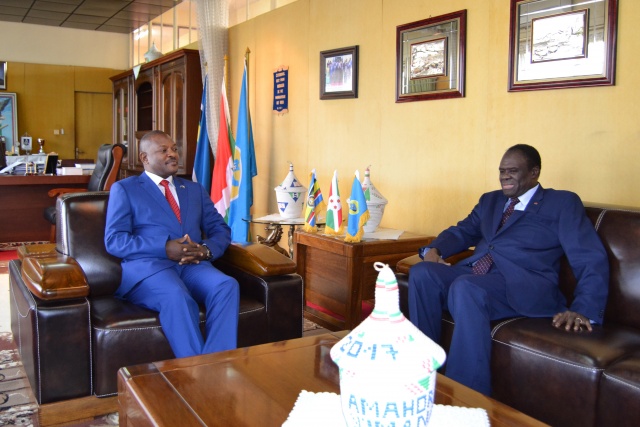 Special Envoy of The UN Secretary-General to Burundi Michel Kafondo (R) speaks during a meeting with Burundi President Pierre Nkurunziza at The Presidency in Bujumbura on June 29, 2017. (STR / AFP)

(AFP) - Burundi on Thursday said it has "faith" in the new UN envoy to the crisis-hit country but warned Michel Kafando against "bias" in favour of opposition groups, an accusation also levelled at his predecessors.

Appointed last month Kafando, a former president of Burkina Faso, is the fourth UN envoy to be named since June 2015 after the Burundian government objected to his predecessors.

The envoy's key role is to mediate an end to a deep and sometimes violent political crisis that began in April 2015 when President Pierre Nkurunziza announced his intention to run for a controversial third term which he went on to win.

However, the government refuses to negotiate with the exiled opposition, which it accuses of being behind more than two years of sporadic violence.

"The Burundian government has faith in him. In the light of his experience, of what he has done," said Claude Karerwa Ndanzako, spokesman for the Burundian presidency, after Kafando and Nkurunziza met on Thursday.

"We believe and we hope that he will do better than his predecessors," Ndanzako said, warning Kafando against "leaning" towards the opposition or publishing "slanderous reports against Burundi".

The relationship between Burundi and the UN worsened after the publication of a damning human rights report in September 2016 that accused security forces of abuses.

At least 500 people have been killed and over 400,000 have fled the country since the crisis began.