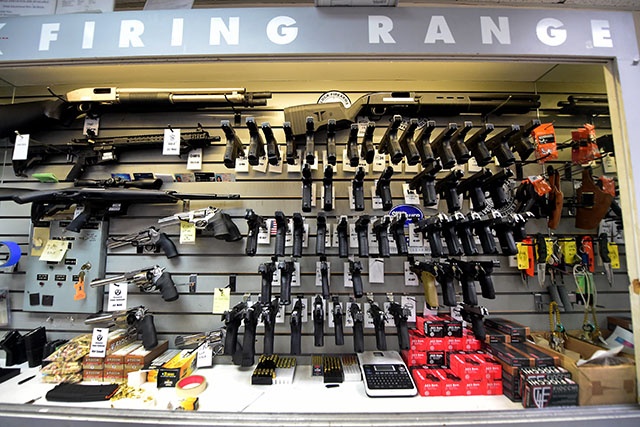 Students and professors will be legally allowed to carry concealed handguns onto college campuses starting Saturday in the US state of Kansas. (Frederic J. BROWN / AFP)

(AFP) - Students and professors will be legally allowed to carry concealed handguns onto college campuses starting Saturday in the US state of Kansas.

The concealed carry law was enacted four years ago and applied to all public buildings, but colleges in the Midwestern state were exempted until July of this year.

The law is the latest in a series of state legislative efforts around the country to address the issue of campus safety from potential shooters.

Some approaches tightened restrictions on guns while others made them more available with the goal of allowing potential targets of gun violence to defend themselves with their own weapons.

Kansas is joining Arkansas, Georgia and other states with laws that allow students and faculty to carry guns on college campuses. California and South Carolina are among 16 states that ban the practice.

The Kansas law would still let universities ban concealed guns, but only if they provide students with metal detectors at entrances to buildings, which school administrators have said would be prohibitively expensive.

The concealed carry law has prompted some faculty to leave state universities, according to Topeka TV station KSNT, even as campus administrators offered guidance and information to help students and staff understand the new requirements.

"I am looking for another job," Philip Nel, an English professor at Kansas State University, told KSNT, "I will not teach armed students, because that's crazy."

Wichita State University emphasized in its guidance that the law still allows for multiple prohibitions.

Universities can still ban other weapons and firearms, aside from concealed handguns, and only those 21 and older are permitted to carry concealed guns, the university said.

"Nothing in this policy shall be interpreted to require individuals who lawfully possess a handgun to use it in defense of others," its guidance said.

Universities can also still ban guns from sports games and other events, if they provide security and metal detectors.

Kansas lawmakers this year also passed another exemption to the concealed carry law -- maintaining a ban on guns at state mental institutions and public hospitals, including those on university campuses.

"The right to bear arms is essential towards preserving our freedoms and maintaining self-government," Kansas's Republican governor Sam Brownback, who had supported the 2013 law, said in a statement endorsing the exemption for hospitals, saying "this bill does appropriately address safety concerns."

"The optics of guns in mental health hospitals obviously is, you know, not defendable," Jim Denning, majority leader of the state senate, told The Kansas City Star newspaper.