Macron in Mali for diplomatic push on Sahel anti-jihadist force 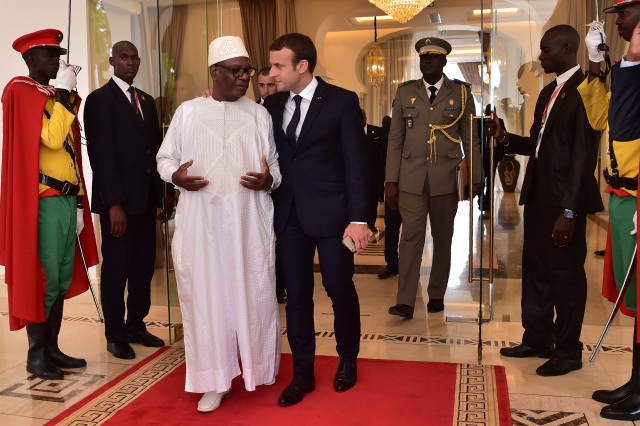 French President Emmanuel Macron (R) walks next to Malian President Ibrahim Boubacar Keita during a G5 Sahel summit, in Bamako, on July 2, 2017, to boost Western backing for a regional anti-jihadist force for the Sahel region amid mounting insecurity and cross-border trafficking. The so-called "G5 Sahel" countries just south of the Sahara -- Burkina Faso, Chad, Mali, Mauritania and Niger -- have pledged to fight jihadists on their own soil with instability and Islamist attacks on the rise. Based in Sevare, central Mali, the 5,000-strong G5 Sahel force aims to bolster 12,000 UN peacekeepers and France's own 4,000-member Operation Barkhane, which is operating in the region. (CHRISTOPHE ARCHAMBAULT / AFP)

(AFP) - French President Emmanuel Macron on Sunday threw his weight behind a planned Sahel force to fight jihadists on a lightning visit to Mali but told countries in the region their efforts had to bear fruit.

Faced with a growing number of jihadist attacks in central Mali which have also hit neighbouring Burkina Faso and Niger, the so-called G5 Sahel nations have moved to set up a regional force to tackle the threat.

The aim is to combat the wave of Islamist bombings, shootings and kidnappings in the Sahel, the region just south of the Sahara.

Nusrat al-Islam wal Muslimeen -- an alliance of Al-Qaeda-allied Sahel groups -- on Saturday offered a reminder of the jihadist threat by releasing a proof-of-life video of six foreign hostages.

Joining the heads of state of Burkina Faso, Chad, Mali, Mauritania and Niger at a summit in Bamako, Macron hailed the initiative as "a dynamic, a groundswell which France is proud to back".

But, he said, "it will be up to you and your armed forces to demonstrate that the G5 can be effective while respecting humanitarian conventions. The results have to be there to convince your partners."

The force, which will initially count some 5,000 troops, will begin its operations in Mali, Burkina Faso and Niger with Macron saying he wants it to be operational by the end of August.

"The important thing is that the joint force be fully operational by autumn, with the initial funds unlocked ... and exhibit first signs of success," he said.

With a base in Sevare in central Mali, the force will work alongside France's 4,000-strong Operation Barkhane as well as with MINUSMA, the UN peacekeeping operation in Mali.

At a news conference with Macron, Malian President Ibrahim Boubacar Keita said the leaders had agreed on a budget of 423 million euros ($480 million).

"Each of our states will make a 10-million-euro contribution," he said, noting that the question of funding had taken precedence at the closed-door talks.

The European Union has already made an initial 50-million-euro pledge which Macron said was "the start of a long-term commitment".

"This is a major step for Sahel security, essential in our eyes," Macron told a crowd of French expatriates in Bamako on Sunday.

Macron is also hoping for extra support from Germany, the Netherlands, Belgium and the United States, and said he hoped it would be possible to make a French-German funding commitment after talks in Paris on July 13.

Although Chad's military is widely viewed as the strongest of the five Sahel nations, President Idriss Deby has said his country cannot afford to mobilise large numbers of troops simultaneously for the UN peacekeeping mission and also in the new force.

Deby and Macron also discussed the financial issue on the sidelines of the Bamako summit, with the French and Malian leaders both saying the Chadian president had been reassured by the talks.

France intervened in Mali 2013 to chase out Al-Qaeda-linked jihadists who had overtaken key northern cities. A year later, that mission evolved into Operation Barkhane with an anti-terror mandate stretching across the Sahel.

The new Sahel force will support national armies trying to catch jihadists across porous frontiers, and its operations will be closely coordinated with Barkhane, a source in the French presidency told AFP.

But the G5 Sahel force will face other problems, with the inherent weakness of the armed forces in Burkina Faso and Mali, while Chad and Niger are already engaged on multiple fronts, said Rinaldo Depagne of the International Crisis Group.

The three-nation border of Liptako-Gourma between Burkina, Mali and Niger, will become a "laboratory" where French forces will work with them before bringing Chad and Mauritania into the mix, he predicted.

The G5 Sahel force's top commander, Malian general Didier Dacko, has said each country's contingent would initially operate on its own soil and gradually shift focus to their mutual borders.