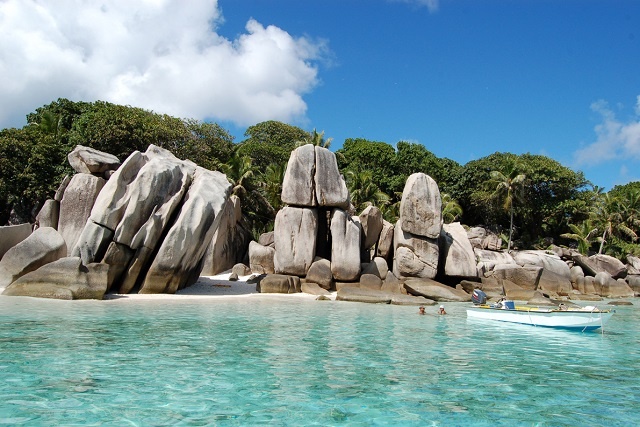 While the Seychelles islands are well known for their beauty and emphasis on environmental protection, people more geologically inclined can also feast their eye on some amazing rock formations.

SNA brings you six of the most fascinating.

With a depth of over 27 feet and 54 feet wide, this rock formation is still a puzzling feature even for the modern archaeologist. A head-scratching archaeological feature, Ros Sodyer, now a national monument, is located in Takamaka, on the southern part of Mahe. It has a large cavity at the edge of the granite slope which links the craggy coastline of Takamaka to the Intendance beach. The massive bowl of sea water adjoins with the waves that regularly crash against the coast, spilling into the hole as they withdraw back into the ocean.

The Devil’s Wall has left researchers scratching their heads over its amazing formation. Local historian Tony Mathiot believes that the inhabitant of Anse des Genets must have appreciated the extraordinary strength of the devil and gave this bizarre heap of boulders its appropriate appellation. He believed that this wall was a stand-alone boulder, which changed over time. Miray Demon is divided into separate pieces of rock, which have more or less remained in place like interlocking pieces of a gigantic jigsaw puzzle. Then again, why on earth would Mother Nature build a devil’s wall in the middle of an island viewed as paradise? It was declared a national monument in 2006.

Where do these steps lead? Can it be a gateway to heaven? Ros Lekalye is a reflection of nature’s artwork and research is still trying to discern how prehistoric people used it.  It appears almost like a gateway to the backwoods used by undersea aliens! Fascinating! This rather unusual feature is known as a dyke. Researchers believe that it is typically the result of intrusion -- a long mass of igneous rock that cuts across the structure of the adjacent rock. This happens when magma or molten rock moves upwards by injecting into cracks at higher levels in the earth’s crust, forcing the sides apart. Magma solidifies in the crack to form a dyke, and in the case here at Port Launay, in the western side of Mahe, the dyke looks like a row of steps.

This marvellous pig rock might just be a geological phenomenon, according to scientists.  Aptly named because it certainly resembles a crouching snarling pig in profile. One can distinctively make out the sunken eyes, the cartilaginous snout over the mouth baring the teeth in a rage.  Of course with so much granite around, it is neither uncommon nor unusual to come across boulders or shapes of some recognisable representation. However, what is for sure, no one knows how this ended up on the heap of the mountain. Located at Anse Louis in the Anse Boileau district in the south of Mahe, Ros Koson was declared a national monument in 2006.

Another mysterious stone is the Anse L’Union Boulder, a massive stone monument of granite covering over one acre of land, on the west coast of La Digue, the third-most populated island. Researchers so far cannot understand the formation of this rock without peering into the complexity of science geology. This rock is made out crystals of quartz, feldspar and mica, and it is believed that the boulder was laid beneath the earth before it was pushed upright a million years ago.  The giant monument stands at the site of a Natural Park habited by tortoises.

This stupefying rock formation is perhaps the first attraction that visitors can come across as they go up the main road outside the international airport of the island nation. The rock is enclosed by a roundabout coupled with water features. If you are travelling the road to Pointe Larue, a southeastern district, there is no way you can miss this compelling feature. As a tortoise is a major attraction in itself and one of the oldest living animals on earth, the longevity of this rock reflects just that.